Thinking of the Old Catholics and the Union of Utrecht 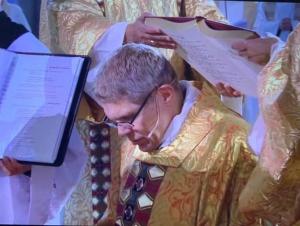 In 1868, Pope Pius IX convened what would come to be called the First Vatican Council. It appears the pope an his closer associates were concerned with the issues of rationalism, materialism, and liberalism in general, as well as the specifics of rising socialism, communism, and anarchism. They did as charged and duly The Council condemned rationalism, secularism, liberalism, naturalism, modernism, materialism and pantheism.

But it was today, the 18th of July, in 1870 that they outdid themselves. They defined Papal Infallibility.

This assertion was controversial, to say the least. Among those, a leader emerged, the German church historian and theologian J.J.I. von Döllinger. The following year, when he refused to accept the dogma, he was excommunicated. However, at the same time he was elected rector of Munich University.

From that position he called a congress of those troubled by the dogma. The congress gathered on the 22nd of September, 1871. Three hundred theologians and clergy attended. They drew up a plan for a new association of Catholics, one freed of the excesses of papal domination and as a potential gathering for Christian reunification.

The new body was called the Old Catholic Church. They gathered disaffected congregations, mostly in Germany, Austria, and Switzerland. As no bishop joined them they turned to the the Jansenist Church of Holland for episcopal orders. Dutch Bishop Heykamp consecrated the Reverend Dr Joseph H. Reinkens on Aug. 11, 1873.

They are bound by the Declaration of Utrecht, which was formulated in 1889. The Union is in full communion with the Evangelical Lutheran Church of Sweden, and through the Bonn Agreement, with the Anglican Communion (including the American Episcopal Church).

An article at the World Council of Churches website summarizes the faith and practice of the Old Catholics.

“The Old-Catholics recognize the same seven ecumenical councils as the Eastern Orthodox churches, and those doctrines accepted by the church before the Great Schism of 1054. They admit seven sacraments and recognize apostolic succession. They also believe in the real presence in the eucharist, but deny transubstantiation, forbid private masses, and permit the reception of the eucharist under one or both elements. The Old-Catholic churches have an episcopal-synodal structure. Bishops, as well as the rest of the clergy, are permitted to marry. All services are in the vernacular. Since 1996 the threefold apostolic ministry is open to women. From the start, Anglicans have been close to Old-Catholics. They participated in an international conference of theologians, convened at Bonn by Old-Catholics in 1874, to discuss the reunion of churches outside Rome. Old-Catholics recognized Anglican ordinations in 1925. Since 1931 they have been in full communion with the Church of England first and later on with all the churches of the Anglican Communion. The Archbishop of Canterbury has a permanent representative with the International Old-Catholic Bishops’ Conference.”

The issues around women’s ordination and blessing of same sex unions led to a rupture with the only American affiliated church, the Polish National Catholic Church. After refusing communion with bodies that allowed the ordination of women, including the Episcopal Church the PNCC  was expelled from the Union in 2003.

(A note: Here in North America and elsewhere there are micro-denominations and clergy who use the term “Old Catholic,” or that derive their orders through Old Catholic bishops. These bodies, some of which I find very interesting, are, however, not connected to the Union. Most are clear about this, but some are very misleading about their relationship with the Old Catholic movement. As I said, a note.)

The 84th in succession and current Archbishop of Utrecht and first among equals among the bishops of the Old Catholic churches is the Most Reverend Bernd Theodoor Wallet. The image with this article is of the archbishop at his consecration on the 18th of September, 2021.

So, a lot of water under the bridge since this day, one hundred and fifty-two years ago.

A general google search did not show up their current demographics, numbers of congregations, clergy, nor membership. They are small and are facing the issues common to all Christian denominations in Europe. I wouldn’t hazard a guess as to the number of churches, but I think their membership numbers in the tens of thousands across their several European countries.

While a small band, I find them fascinating. I’m especially interested in their cross-fertilization with the Anglican communion.

So, thank you, Pius! Some serious good came out of a very problematic council…

July 17, 2022
Marking my Seventy-fourth Birthday, a brief sketch of what happened and how I ended up in the pickle I'm in
Next Post

July 19, 2022 Noticing the birth of Seraphim of Sarov, and with that a few mind bubbles
Recent Comments
0 | Leave a Comment
Browse Our Archives
Related posts from Monkey Mind