Noticing the birth of Seraphim of Sarov, and with that a few mind bubbles 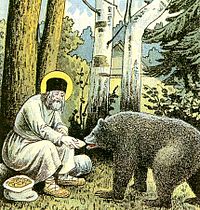 According to the old style, today, the 19th of July, in 1754, is marked as Seraphim of Sarov‘s birthday.

Current calendars put the date at July 30th. But noticing it and thinking of the saint caused a flood of mind bubbles…

Seraphim is perhaps the most famous of the Eastern Christian saints. He was an ascetic and mystic and is frequently compared to St Francis of Assisi.

Now I’m no fan of extreme asceticism. And Seraphim is something of an exemplar of that reckless enthusiasm, throwing himself into extreme disciplines that no doubt had a negative effect on his health. But there is also something within a fierce devotion to practice that can be lost by those of us who seek paths with less obvious damage. I’m also painfully aware of people who end up playing in shallow waters for their whole lives, never pushing through the easy distractions, and ultimately throwing the opportunity of this life away.

As a solitary without obligation beyond his quest for the beatific vision, I think hazarding early death justifiable. I believe the quest is that important. Absolutely. And he offers a lesson for all of us who tread the spiritual way. Throw your whole being into the matter. It is that important.

With a lot of caveats…

Also. Thinking of Saraphim I also find myself thinking about miraculous visions, another aspect of his life.

In truth they’re part and parcel of all religious traditions, including my own. We on the Zen way, however, take a jaundiced view of visionary experiences. We tend to offer two views. One is “don’t worry, they’ll pass.” And the teaching is that these visions are distractions, makyo, literally diabolic interference.

So, experience them. And as long as one doesn’t stop and build shrines to them, there is nothing wrong in the experience. Just more experiences. Although sometimes experiences are intertwined with awakening. So, respect, as well.

And I have no idea what the saint thought of his moments of grace. But I do notice his admirers make a great deal of them. Too much in my estimation.

As a universalist admirer, I try to take the accounts, hear them, and let them be pointers for a moment, but hold them lightly. That is, of course, the universal solvent on the spiritual way. Hold everything lightly. But most of all hold our own ideas and experiences lightly. Don’t build shrines to moments. Let them happen. Then let them go…

Do this and the holy appears.

Seraphim is said to have said “Acquire a peaceful spirit and thousands around you will be saved.”

I find this a great teaching. Of course that word saved has so many meanings.

We take it that way and the saint’s advice could be said by anyone who has followed the way authentically.

Open your heart and all will be saved.

July 18, 2022
Thinking of the Old Catholics and the Union of Utrecht
Next Post

July 20, 2022 St Wilgefortis: Recalling a Queer Saint
Recent Comments
0 | Leave a Comment
"e"
Wemmu Finding the God Within: Zen, Marcus ..."
"e"
quaser79 Finding the God Within: Zen, Marcus ..."
"everything Jesus has to say about being a true believer of the true way is ..."
Isa Kocher HONEST TO JESUS: The Zen minister ..."
"My translation at http://home.pon.net/wildros...and here https://terebess.hu/english...Terebess has 26 translations at https://terebess.hu/zen/tex..."
Gregory Wonderwheel Faith in Mind, the Xinxinming, a ..."
Browse Our Archives
Related posts from Monkey Mind