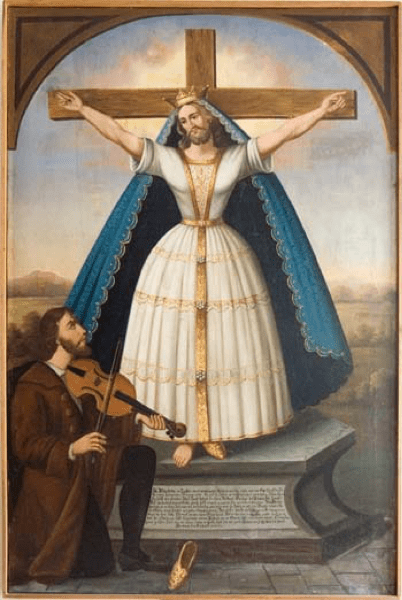 The story of St Wilgefortis is simple enough. Born noble as a teenager in some part of what is now Portugal, possibly Galicia, she is promised in marriage to a Muslim or some other kind of pagan, king. Having become Christian she has secretly taken a vow of perpetual virginity. To avoid the marriage she prayed to be made repulsive to the king. The answer to her prayer was a luxurious beard that appeared on the morning she was to be married. The king backs out, and her enraged father had her crucified.

Apparently the story was wildly successful throughout the fifteenth century. While never formally canonized she found devotees among people seeking relief from their sufferings, especially women suffering abusive husbands. And her feast, the 20th of July, made it on to many Catholic liturgical calendars.

Some speculate that the story arose with pictures of the crucified Christ wearing a full-length tunic. And that people, mostly peasants, saw in the androgynous image a woman. Stories followed. Lots of stories.

By the sixteenth century the legend was debunked. At least as a historical event. There remained a half-life to her cult, one that hasn’t yet completely played out. She wasn’t actually removed from the Roman calendar until 1969. But she continues to have devotees.

It’s been suggested her story appears to belong among a number of similar stories that feature cross-dressing figures, often monks. For more about St Wilgefortis see Ilse Friesen’s “The Female Crucifix: Images of St. Wilgefortis Since the Middle Ages.”

Personally, I’m all in favor a saint to appeal to in helpless situations. Lots of those. Too many of those…

July 19, 2022
Noticing the birth of Seraphim of Sarov, and with that a few mind bubbles
Next Post