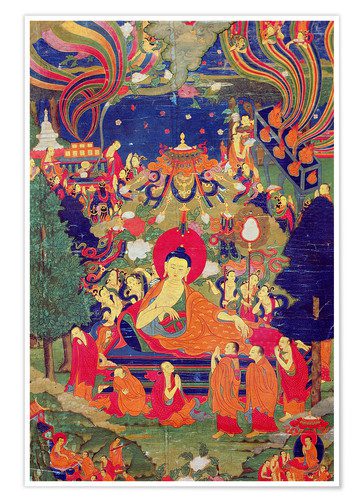 “Make of yourself a light”
said the Buddha,
before he died.
I think of this every morning
as the east begins
to tear off its many clouds
of darkness, to send up the first

signal-a white fan
streaked with pink and violet,
even green.
An old man, he lay down
between two sala trees,
and he might have said anything,
knowing it was his final hour.
The light burns upward,
it thickens and settles over the fields.
Around him, the villagers gathered
and stretched forward to listen.
Even before the sun itself
hangs, disattached, in the blue air,
I am touched everywhere
by its ocean of yellow waves.
No doubt he thought of everything
that had happened in his difficult life.
And then I feel the sun itself
as it blazes over the hills,
like a million flowers on fire-
clearly I’m not needed,
yet I feel myself turning
into something of inexplicable value.
Slowly, beneath the branches,
he raised his head.
He looked into the faces of that frightened crowd.

So, Mary Oliver tells us the Holy One’s last words were “make yourself a light.” I like it. A lot. And, well, there are other last words attributed to the Buddha to consider. Not the least, his actual last words. Or, well, his last words as best we can know given all the givens.

The principal text addressing the moment when he would have spoken last words, the Mahaparinibbana Sutta is clearly, at least by my reading, a digest of his teachings composed with an eye to the continuation of the community he led. I have little doubt a fair amount of it was how shall we say, “enriched” by those who won the ensuing struggles for leadership.

For those familiar with New Testament studies, the text feels similar to that “second Paul,” the author of First & Second Timothy & Titus, that address the young church and is packed full of institutional advice. Much of it to my read highly questionable given what we know of Jesus’ actual teachings. So, those three texts are clearly to most critical readers from someone different than the ecstatic mystic who wrote or whose teachings are compiled as most of the other letters.

With that the Buddha’s last words. Captured in this ancient document, the Mahaparinibbana Sutta. Whatever else is true they were committed to writing several hundred years after his death. That noted, I suspect they had a magical quality, a halo around them, and are more likely than most things to be what he actually said. At least I think, feel, suspect could be the case.

There are various translations of them as recorded in the Mahaparinibbana Sutta.

What we get are two points, an observation and an exhortation.

With that my paraphrase of those two things.

Dear ones, all things pass away. Walk with reverence.

The first part continues a theme the Buddha touched on throughout his teaching ministry. Things are composed of parts, and anything composed of parts will come apart. And with that any grasping of those most transient of what are more moments than things, will ultimately be thwarted. Grasping water. And with that frustration, unhappiness, dissatisfaction, dis-ease follows like night follows day.

What that victory is he doesn’t spell out. Or, rather it is spelled out a bit differently in the various traditions that follow him. It’s a release. The Dhammapada, a collection of his sayings tells us when the Buddha had his great awakening he declared

“House builder, you’re seen through! You will not build a house again. The rafters are broken, the ridge pole is destroyed. All gone to the unformed. The mind has come to the end of craving.”

Much, much later Keizan Jokin, in his anthology of the line of transmission in the Zen school, declares that what actually happened went more like this:

“Sakyamuni Buddha saw the morning star, awakened to the way, and said, ‘I, together with the great earth and sentient beings, simultaneously attain the way.'”

I notice the different schools shift what that victory is a fair amount, ranging from separation and extinction to fully engaged without attaching to any result. Me, I’m not so inclined to that first view, and completely in accord with the second.

Not that I’m attaching to any results, you understand…

In any case that old monk who gathered a small band around him and preached a lot of sermons in a land so alien it is hard to even picture it much less comprehend it, teaching in a language lost to us and so recorded centuries after his death in languages he did not speak, sparked something.

Sort of a light shining into the darkness…

Dear ones, all things pass away. Walk with reverence.

A light into many individual hearts. Those individual hearts he called to work diligently, to see through the transience of things, and to win some great victory on the other side of our grasping at things.

August 21, 2022
The Dark Soil of God: A Zen Meditation on the Psalms
Next Post