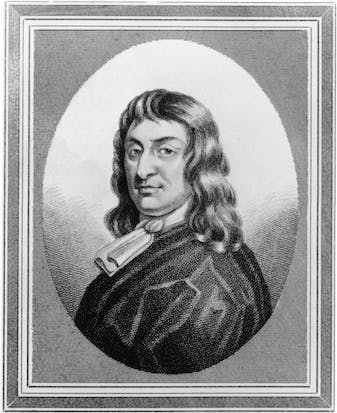 Blood, that wears treason in his face,
Villain complete in parson’s gown,
How much he is at court in grace
For stealing Ormond and the crown!
Since loyalty does no man good,
Let’s steal the King, and outdo Blood!

He was born in 1618 in County Clare, in the Kingdom of Ireland. His father was a blacksmith and successful business man. So young Thomas got a good education. He was raised a Presbyterian. But during the Civil War he started out as a loyalist but watching the tide, shifted to Cromwell in good enough time to be generously rewarded.

However with the restoration his fortunes fell. And he moved into full time criminality.

The litany of his high crimes and misdemeanors is pretty long.

The critical one the event took place in 1671.

Colonel (we’re not quite sure where that rank came from) Blood, pretending to an Anglican priest had cultivated the friendship of the elderly Thomas Edwards, Master of the Jewel House at the Tower of London. He wormed his way into the affections of the Edwards family and even proposed a marriage between his (nonexistent) rich nephew and the Edwards’ daughter.

Then on this day the parson colonel and a gang he had prepared made their move. Having tricked the Master into opening the grill to the jewels, they threw a cloak over the old man, beat him with a mallet, and stabbed him at least once. The Wikipedia article on Colonel Blood, itself citing the New American Cyclopedia, tells us “Blood used the mallet to flatten St. Edward’s Crown so that he could hide it beneath his clerical coat. Another conspirator, Blood’s brother-in-law Hunt, filed the Sceptre with the Cross in two (as it did not fit in their bag), while the third man, Perrot, stuffed the Sovereign’s Orb down his trousers. Meanwhile Edwards refused to stay subdued and fought against his bindings.” Edwards finally freed himself sufficiently to sound the alarm.

The upshot is that Blood and his gang were captured. Upon his capture Blood is said to have declared “It was a gallant attempt, however unsuccessful! It was for a crown!” He refused to talk to anyone but the king. For reasons that aren’t clear to me, or, apparently anyone, the king agreed. He was chained and brought before the sovereign.

King Charles questioned him and was entertained by the bald faced roguery. The colonel admitted that he had thought to assassinate the king, but when witnessing Charles in the flesh found himself “in awe of majesty.” And so decided instead to steal the jewels. Apparently flattered the king then asked “What if I should give you your life?” To which Blood responded “I will endeavor to deserve it, sire.”

Charles decided it was all a lark, pardoned the criminal, and then bestowed lands on both Blood and the ill treated Edwards. Blood’s reward was an estate that delivered an income of five hundred pounds a year. He was instantly rich.

Colonel Blood would become a figure about town. And, apparently supplemented his income selling contacts to the royals.

He died nine years later at home. A son would rise to brigadier general, while other descendants would be prominent within the empire.

Here lies the man who boldly hath run through
More villainies than England ever knew;
And ne’er to any friend he had was true.
Here let him then by all unpitied lie,
And let’s rejoice his time was come to die.

I struggle to find a moral in this tale. If there is one, I fear it isn’t what I’d like it to be.

But, it feels, worth noticing…

August 29, 2022 Announcing New Zen Teachers
Recent Comments
0 | Leave a Comment
"I was always taught (since 1970) that in China, anyway, the five classic poses for ..."
Neva Trejo A Note on the Use of ..."
"A wonderful piece, James. I was recently sitting a week long thing, and two days ..."
Keith Angilly A Note on the Use of ..."
"Thank you, Mark."
jamesiford The Zen of Lewis Carroll: A ..."
"Thanks!"
Bob Evans Considering Universalism: The Secret Teaching of ..."
Browse Our Archives
Related posts from Monkey Mind