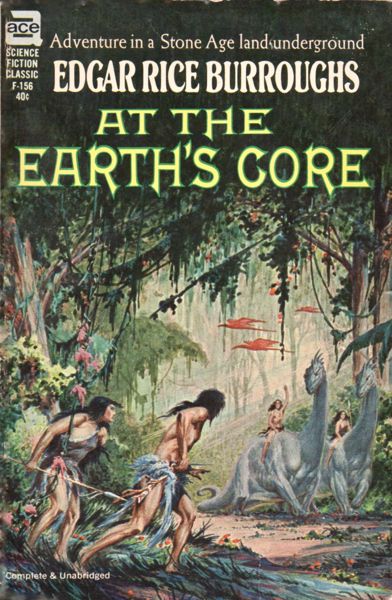 I was two years old.

A decade later, or close to it, a friend and I were rummaging through some boxes of magazines and books looking for old copies of my father’s stash of Playboys. I’ve recounted before how instead I found a cache of Ace paperback editions of Edgar Rice Burroughs’ novels. I repeat it because the story is an important marker in my life.

I’m almost positive my first Burroughs novel was At the Earth’s Core. It was probably the first “adult” novel I ever picked out and read on my own. It certainly marked a shift in my reading from children’s and young adult books, to something new.

In some tellings of this turning point in my life I note how they were replete with Frank Frazetta covers. I loved those covers. However, I looked, and the edition I had to have read was illustrated by Roy Krenkel.

While Burroughs is most remembered for his Tarzan books, he was prolific, writing much early twentieth century Science Fiction, or perhaps more accurately a kind of interplanetary romance. Me, I cannot overstate the importance of Science Fiction in opening vistas for me in a life that was very constrained by poverty and my father’s constant moving on to new possibilities. And it was Burroughs who brought me to Science Fiction.

I quickly read Burroughs biographical sketch at Wikipedia. It contains a famous quote where Burroughs commented about spending a lot of time reading pulp fiction and then deciding “…if people were paid for writing rot such as I read in some of those magazines that I could write stories just as rotten. As a matter of fact, although I had never written a story, I knew absolutely that I could write stories just as entertaining and probably a whole lot more so than any I chanced to read in those magazines.”

To my mind many years later Burroughs was a hack. A successful business man, basically creating Edgar Rice Burroughs Incorporated, an amazingly successful marketer. And he was important to me, very important. But as a writer, still, a hack. Not to mention a racist and several other unsavory things.

However, no one less than Ray Bradbury tells us how “I’ve talked to more biochemists and more astronomers who, fell in love with John Carter and Tarzan and decided to become something romantic. Burroughs put us on the moon. All the technologists read Burroughs.” Digging into it all a bit, more, and especially who the characters were and what they might mean, the author(s) of the Wikipedia article suggest of his plotting:

“Certainly the most evident feature of Burroughs’s novels is their frequently formulaic nature. There are plentiful mad scientists and mad queens, strong but honorable heroes, and a nearly certain guarantee that the hero of any novel will fall in love with a woman who sooner or later turns out to be a princess. Unlike a lot of recent fiction, the main characters are never equivocal about their good or bad natures. While the plot structures are therefore predictable, they are nevertheless satisfying, accounting in large measure for their continuing success.

“There is a Horatio Alger-like implication that honesty, courage, and hard work will eventually succeed (e.g., John Carter’s (the protagonist of my favorite among his several series, the Martian novels) frequent exclamation, “I still live!”) and that scheming, avarice, hatred, and laziness will not. And even this formulaic nature, not original with but perfected by Burroughs, has had a host of imitators, right through to the Star Wars films, which include many of the famous Burroughs tropes, such as the princess in distress (Princess Leia) rescued by the hero.”

That gave me a moment of pause…

They, the author(s) also attempt a sympathetic analysis of his racism and sexism. And these “isms” in Burroughs books are inescapable. The authors of the essay’s assertion is that he carried most of the general racial and sexual stereotypes of his time and place. But was remarkable in the number of noble and frequently heroic individuals in those despised categories that he portrayed throughout his many novels. In particular, this was true of Native Americans. They also suggested he grew over the years, particularly after moving to California, and some of his racism muted over time. I briefly looked around the web and this seems a generally accepted view.

Not to let him completely off the hook. There were plenty of people from his time and place who saw through the privileging of European derived cultures, and while fewer, still a number of people who saw through gender stereotyping. It’s just, as much of life is, that some nuance needs to be seen as we note his terrible shortcomings.

In particular I think about that line in the analysis of Burroughs plotting, that “There is a Horatio Alger-like implication that honesty, courage, and hard work will eventually succeed (e.g., John Carter’s frequent exclamation, “I still live!”) and that scheming, avarice, hatred, and laziness will not.” Not deep and nuanced thinking here, but that doesn’t mean these aren’t important values…

And, Lord knows, I wasn’t going to get them from my father.

And, obviously, these values need some nuancing and even relativizing. One can, after all, be honest, courageous and hard working, and can still fail. Happens all the time.

Real values. Should be held up. And for me, this is probably a main place they were for me at a formative point in my life. For the bad parts, somehow I was lucky to form my young adulthood in a time where sexism and racism and for a moment anti-semitism were all being actively challenged. And, as they say, it takes a village.

But for those important parts of honesty, courage, and hard work, not only did Burroughs open a world of the imagination for me, he probably was also one of the important figures giving me some of the values I hold to this day.

And, Edgar, beaten and bruised, I still live! And, thank all the holy ones, I am still curious, and still learning.

So, Edgar, once again, thank you for the pointers and the inspiration!