Kyogen Carlson: A Zen Master in an American Grain 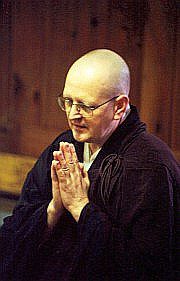 I find myself recalling the American Zen Master Kyogen Carlson, who died eight years ago, yesterday.

Kyogen was one of the senior Zen teachers in North America, respected and loved across the continent. He was also my friend. My history of Zen in the West, Zen Master Who? contains the bare outline of his life.

“Gary Alan Carlson was born in Los Angeles on October 8, 1948. His parents met in the Yukon during military service. His father later worked in the moving and storage business. An only child, he was raised in Orange County, in the Christian Science faith. Gary earned his bachelor’s degree at the University of California, Berkeley, in 1971. In many ways, he came of age at one of the epicenters of the social and political upheavals of the period.

“Reading Eugene Herrigel’s Zen and the Art of Archery and The Method of Zen, he started seriously contemplating the meaning of his life. Following a profound experience of spaciousness – what he later thought of as an “oceanic feeling” – while in a eucalyptus grove above campus, he determined to pursue the inner life. A year after graduation he entered the monastery at Shasta Abbey. He was ordained an unsui on September 26, 1972, receiving the Dharma name Kyogen.

“Kyogen served as jisha, or personal attendant, to Roshi Jiyu Kennett for over nine years. He completed Shuso Hossen in 1974, and received Dharma transmission in the same year. In 1978 after Roshi Kennett introduced Inka as a final certification at Shasta Abbey, Kyogen received Inka and the title Roshi.” 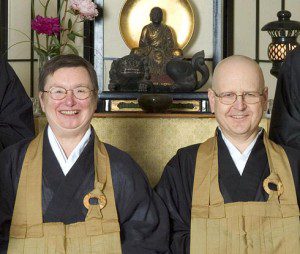 In 1982 he married his fellow practitioner Gyokuko Andrea Gass. And the couple were placed in charge of the Portland and Eugene affiliates.

In 1985 Kennett Roshi declared the order would henceforth be celibate and required all priests who were married to either divorce or disrobe. Kyogen and Gyokuko pointed out there was a third option. They went to their boards and explained the situation. The Portland group decided to break from Shasta Abbey, calling the couple as their teachers.

The group eventually took the name Dharma Rain Zen Center. And it thrived. They initiated a religious education program for children that has become the standard for Zen communities in the west looking to provide for their children. As a result of their combining a fierce dedication to the heart of practice with a willingness to meet the needs of the people who came to them, the community they led thrived. Today Dharma Rain is one of the largest Zen communities in North America.

He was a singular voice in interfaith dialogue in the Portland area, particularly reaching out to the Evangelical Christian community. At the time of his death, the Dharma Rain Zen Center has embarked on a bold program of expansion, recently breaking ground on a temple complex that includes co-housing together with more traditional Zen Buddhist facilities.

While our styles were quite different, I consider Guyokuko and Kyogen among my closest Dharma family. All of us heirs to the late Houn Jiyu Kennett, genuinely siblings on the great way.

Kyogen wrote a first rate book, Zen in an American Grain. A second book, consisting of number of his talks and writings compiled and edited by his dharma heir Sallie Jiko Tisdale, You Are Still Here, was published in 2021.

Roshi Kyogen Carlson was a good, generous, and kind man. He was a true exemplar of what can happen when one gives a life time to the Zen way, and because of he and his spouse Gyokuko, the ancient Zen way continues to have a center for training and practice in the American Pacific Northwest.

September 18, 2022
The Spiritual Pilgrim offers a Progress Report
Next Post

September 21, 2022 The Zen Minister Considers His Father and Dreams of our Fathers
Recent Comments
0 | Leave a Comment
Browse Our Archives
Related posts from Monkey Mind