Thanks to a schedule misunderstanding, I missed my parish’s Ascension liturgy on Thursday, for what I think is the third year running. One year, which I think was 2019 but may have been earlier, was due to an ill-timed nap; last year was of course 2020. It’s one of my favorite feasts, too. On the other hand, there’s a Novus Ordo parish not far from me that I’ve been thinking of dropping in on—my parish’s architecture is okay, but this one’s is heartbreaking—so I suppose I can make that my Sunday.

As a pro-lifer I’m not upset about the idea of President Biden, Nancy Pelosi, et al. being refused Communion. It’s difficult for me to see why that hasn’t been happening for at least thirty years by now: it was, very rightly, done over segregation. I am, however, disgusted by the blatant partisanship at work here. Former President Trump was of course nominally Protestant, so there could hardly be any question of disciplining him; but people like Mike Pompeo and Bill Barr could and should have been thus publicly reprimanded for their outrageous insolence to the Holy See, among other things. And even if disciplining Trump was impossible, sucking up to him wasn’t necessary.

Every year or two I reread Dorothy Sayers’ novel Gaudy Night. I’m not even a mystery buff—it’s simply one of the best novels ever written. The action is set at an Oxford women’s college in the 1930s, and despite the conflicts it involves, it opens a window onto a world that is incredibly peaceful, with a quality like a clear spring day after a rain. The characters are winsome, the writing is witty, and the themes are deeply nourishing; I’ve never found a more intelligent discussion of discernment and vocation, not in books that are explicitly about them. 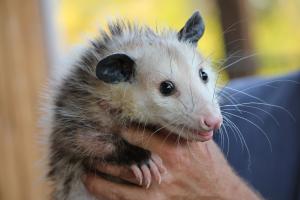 If like me you are on Twitter, well, I can’t honestly say that’s a good thing. But, to ameliorate it, I strongly recommend following @possumeveryhour. It’s exactly what it says on the tin, and it’s delightful. You may think possums are nasty creatures; personally I think they’re a perfect example of uglycute, on top of which they eat ticks and most are immune to rabies.

I started to fall in love with Catholicism on a conscious level when I was about fourteen, and my class read The Song of Roland and Dante’s Inferno (incidentally, in Sayers’ translations). The first book we read after those was The Name of the Rose, a postmodern novel set in the fourteenth century, in the midst of debates over the practice of poverty by various branches of the Franciscan Order. I have a theory that the Church today is badly in need of poverty. I think culture war priorities really have almost nothing to do with what is good for society, and everything to do with what makes most Christians feel comfortable. Poverty means powerlessness, poverty means exclusion. Those things align with Christ’s example far better than anything the Moral Majority ever did.

May 26, 2021 The Revolt of Fr. Altman
Recent Comments
0 | Leave a Comment
"Tried expressing this in a tumblr post, to some success, but your post is more ..."
Lena Danvers Whose June Is It?
"I can’t muster the energy to care about this kind of thing anymore. I doubt ..."
Irksome1 Whose June Is It?
"O Jesus……lead all souls to heaven especially those most in need of thy mercy……..I always ..."
RPlavo . Whose June Is It?
"Both organizations belong in history’s dust bin."
kenofken Whose June Is It?
Browse Our Archives
get the latest from
Mudblood Catholic
Sign up for our newsletter
POPULAR AT PATHEOS Catholic
1

I Have Decided to Believe In...
Steel Magnificat
Related posts from Mudblood Catholic