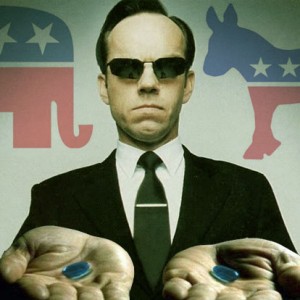 In Part I I talked about my political awakening, specifically how I became enamored with Ron Paul and political libertarianism. I also explained the definition of government accepted by most political scientists today, and its origins in German fascism.

Today I want us to talk about condemning terrorism, and I’ll keep this short because I hope the real fruit of this discussion will be in the comments section. So, everyone put down the flags and the history books for a second, because I think this deserves some deeper contemplation.

Let’s start with the definition of terrorism:

terrorism, -n. – The calculated use of violence, or the threat of violence, against civilians in order to attain goals that are political or religious or ideological in nature; this is done through intimidation or coercion or instilling fear (Princeton)

Now compare that with the accepted definition of government:

government, -n. – That entity which claims a monopoly on the legitimate use of violence in a given area

If we compare those definitions… a government is by definition a type of terrorist organization. An entity which claims a monopoly on the calculated use of violence, or the threat of violence, against civilians in a given area in order to attain goals that are political or religious or ideological in nature.

Viewed this way, a government is essentially just a terrorist organization that claims a monopoly, and subjugates it’s people so successfully that overt violence is masked behind a successful public relations campaign.

Actually defining terrorism has been the great bugbear of the War on Terror. The U.N. has repeatedly failed to achieve an internationally agreed upon definition for years… why? Because it is virtually impossible to find any definition of terrorism that does not exactly describe the actions of governments.

Believe me, I don’t like the corner this pushes me into. If I consistently condemn terrorism, I don’t know how to avoid condemning the very concept of government, or at least this concept of government. That puts me in a radical political fringe, not only among Americans, but among Muslims.

With all sincerity, please give me a definition of terrorism, or a definition of government that is both accurate, and avoids this problem. Give me a rational criterion I can use as a methodology to determine who deserves my condemnation. I’ll go where the evidence leads.

I condemn, in the most serious of terms, any and all initiation of violence, or threat of violence, against civilians to achieve political, religious or ideological goals. What kind of sense would it make to say that I don’t condemn those actions when the culprit is dressed in the right costume, wearing the right badge or waving the right flag?

Looking forward to your comments.

May 17, 2013
My Political Agnosticism: Part II: Monopoly on Violence
Next Post

May 25, 2013 Why Palestine Needs Bitcoin
Recent Comments
0 | Leave a Comment
Browse Our Archives
get the latest from
Muslim
Sign up for our newsletter
POPULAR AT PATHEOS Muslim
1