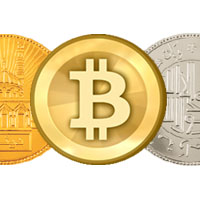 Did you know  that the common currency in most of Palestine is the Israeli shekel, controlled by interest rates from  the Bank of Israel. Mortal enemies locked in a multi-generational blood feud that has produced that world’s largest open air prison and Palestinians still allow Israel to dictate their finances. Activists the world over advocate boycotts, divestment and sanctions against the Zionist occupying government, so why are Palestinians still using their money? Probably because there was no viable alternative… until now.

Palestine has a multi-billion dollar economy, but unfortunately it mostly benefits outsiders. Palestinians toil behind an apartheid wall by land, and a blockade by sea, meaning everything that enters or exits the country is subject to the scrutiny of their oppressors. Israel not only turns away the import of weapons, but also medicines, tools, chocolate and more. A few  life giving supply lines exist in the form of tunnels used by smugglers to Egypt, but the supply tunnels are increasingly targeted for destruction by Israel.

If they look to their history and their tradition the natural alternative currency for Palestinians would be precious metals. Armed with a sound currency, Palestine’s currency would maintain its purchasing power as paper currencies like the Israeli shekel were inflated into worthlessness. The living standards of Palestinians would increase relative to their neighbors. But it is unlikely there are sufficient quantities of precious metals in Palestine to service their economy, and taking physical possession of gold and silver would require smuggling, with all the risks that entails.

Bitcoin changes everything. With a minimum of infrastructure the peer-to-peer digital commodity would give Palestinians the ability conduct transactions, both with each other and with the outside world, right through the wall. It would allow them to economically secede from the Bank of Israel and conduct themselves as an independent financial entity. And best of all Israel could neither prevent nor confiscate their payments.

We’re already seeing Bitcoin used this way in Iran, where international sanctions and a domestic currency manipulations are tag teaming the Persian people’s wealth. Iranian musician Mohammad Rafigh translated some of the Bitcoin software into Farsi and encouraging adoption in Iran. Rafigh accepts Bitcoin for his music. Using Bitcoin Iranians living abroad can send money to their families, or exchange them for rials and dollars. It has allowed them, at the individual level, to maintain an economic connection to the outside world, which is exactly what Palestine needs. When US sanction against Iraq killed an estimated 1 million innocent civilians in the 90s it’s easy to see how important that is.

May 22, 2013
My Political Agnosticism Part III: Condemning Terrorism
Next Post