Nascar, You Can Do Better Than This

It’s pretty well known that I’m a Nascar fan.  I didn’t see any races this weekend because I’m also an NFL fan so I was saving my limited TV time for the games on Sunday.  I was watching CNN’s Headline News this morning when they broadcast a story, complete with video, about Nascar driver Tony Stewart and his penchant for grabbing women’s butts.  This time the victim was the wife of fellow driver Kevin Harvick.  I was really astounded at the light tenor of the news story and the fact that no one seemed really offended by his behavior.  Well, if she can’t get offended for  her own sake, if her husband can’t get offended for her sake, I’ll get offended enough for both of them.

What standard of morality and respect for women says that a man can come up behind a woman not his wife, in public, in the presence of the her husband, and grab a big chunk of her behind with his meaty manpaws?  According to what standard of decency and regard for women is this allowed?  Can someone tell me, please?

If someone were to come up behind me and grab any part of my person, let alone my tush, in the presence of my husband, that person would be at the very least dealing with a broken jaw and some missing teeth.  And then after I got done with him, my husband would, as we say in the South, “stomp his ass into a mudhole and stomp it dry”.  No one should put a hand on a woman that way.  As bad as the action is, worse is the chuckle-tee-hee aint-he-a-bad-boy response I saw from  CNN’s Headline News  anchor.

What message are we sending to our mothers, our wives, and our daughters?  Sweetie, your body is not your own, and any good ole boy can grab your butt and no one will stop him.  Oh, and you have to pretend it’s okay even if you are seething inside.  You have to smile and give him a friendly wag of the finger and HUG him.  And your husband will stand there smiling and think that this juvenile act is just par for the course.

Am I making a mountain out of a molehill?  I don’t think so.  This is sexual harassment, plain and simple.  Kevin Harvick’s wife has either become inured to  it as part of the rough reality of being part of the macho world of Nascar, or she feels like she will be criticized or ostracized if she speaks out.  Well, for her and for every woman in America who has ever had to suffer some guy copping a feel on the subway, or who has dealt with an employer’s inappropriate advances, or has had  the talk with their son our daughter about “good touch, bad touch”, I will speak out.

It’s not right.  It should not be accepted with a wink and a nudge, and Tony Stewart should be called out and stopped.

He is assaulting women (and men)  in front of cameras that broadcast his activity to hundreds of thousands of men and women, boys and girls.  Nascar should call him out on it, sanction him for it, and let it be known to all the drivers, crew, and staff that sexual harassment is not condoned by their organization.  It happened on your turf, Nascar – you need to man up and take care of it.

September 15, 2012
May Allah Guide Them, or Break Their Backs
Next Post 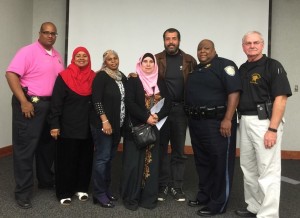 Muslim
Securing the Faithful - A Session I Attended...
Muslimah in Progress
TRENDING AT PATHEOS Muslim