Get updates from Muslimah in Progress delivered straight to your inbox 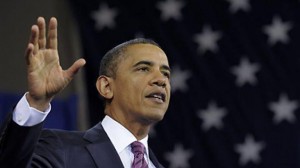 About fifteen minutes ago, MSNBC told me that they were calling the election and reporting that President Barack Obama had won and would be elected to a second term.

I’m not shedding tears of joy. I’m not jumping up and down or yelling “alhamdulillah” at the TV. Wouldn’t want to wake the kids. And my mild satisfaction at the victory of President Obama is leavened by the reality of all the troubles in the world. With the re-election of President Obama, the damage from Hurricane Sandy did not miraculously subside. Predator drones were not grounded and prevented from making deadly raids on sovereign states. The apartheid wall that surrounds the Palestinians will not be torn down. The US unemployment rate will not plunge. Cellulite will not melt off my hips. Nonetheless, I am happy that he won.

Now, mind you, six weeks ago I was ticked off and over the whole political circus, ready to toss both parties into the trash. I had resolved not to vote at all, and I figured today would be just another day. A day to work, to go buy milk, to entertain the kids while they were off from school. But then I started thinking about it. I realized that the damage Romney could do was substantial, mostly domestic and hitting closer to home. Health care. Taxes. I think the deciding factor was the Supreme Court. Not that I wish ill of any of the Justices, but some are getting a bit long in the tooth and the next president may have the opportunity to appoint one or more justices to the Court, and that really was the tipping point for me. The way our country is going now, if we were to have a conservative court inflicted on us I feel it would really damage the future of our country in ways we can’t even imagine right now, and I’m not just talking about Roe vs Wade. So I got dressed, made sure I had my ID, and headed to the polls and voted.

I appointed myself honorary Facebook Election Headquarters for everyone on my friends list tonight. I updated constantly with my twitter feed open and toggling between Huffington Post, NBC News, and CNN. I banished the kids from the room and told hubby this one night I was not closing the computer until the decision had been made. I stuck myself right in the middle of it and put my opinion out there and blogged about it and quietly talked to Rachel Maddow as she reported to me and the rest of the country about the future of the United States.

So now it’s approaching midnight and I can go to sleep, not so much overjoyed that Obama will continue to be president, but damned relieved that Romney will not. I’ll wake up in the morning as usual to get my kids ready for school and myself ready for work. There won’t be any huge changes in my simple modest life. But maybe I’ll be a bit less worried about going bankrupt due to a medical emergency. I’ll be a little less scared of the future, a touch more hopeful, a bit more relaxed. Considering where we were four years ago, I suppose that’s not too bad.

November 8, 2012 Different Schools of Thought In Islam - What's Up With That?
Recent Comments
0 | Leave a Comment
"This is an excellent analogy. I have struggled to explain to some around me why ..."
Kate A Few Words on the Confederate ..."
"Thank you for this much needed perspective!"
Andrea DiMaggio The Transgender Muslim
"Mash'Allah. I've heard similar. And it makes me crazy. Where is our compassion and our ..."
Lia Leaf There But For the Grace of ..."
"I'm with you Nancy....I have 3 kids, and I'm not their friend. I'm their PARENT. ..."
Jada Nicks Edwards Society Guilty of Rape in Steubenville ..."
Browse Our Archives
get the latest from
Muslim
Sign up for our newsletter
POPULAR AT PATHEOS Muslim
1

Finding My Voice
Emansplaining
Related posts from Muslimah in Progress