It is the start of another season of The John Maloney Project, otherwise known as Open Gym – a partnership between a local private school and the autism school my son attends, as well as the autism community at large. It pairs high school students with autistic students to partake in exercise, friendships and peer relationship-building. D has been attending since its inaugural season when he was five years old, every spring and every fall, save the one fall season in 2007 when his younger brother H was born.

That’s 13 years, 25 seasons of Open Gym. Some seasons are more for my benefit than his, as I get to stop whatever I’m doing and spend 1.5 hours outdoors for six Sundays in a row with fellow autism parents in watching over our kids, friends who get this living in a way that even my own parents and in laws cannot. But I’m pretty sure D enjoys it as well, as he pretty willingly gets in the car to go when I announce it is time for Open Gym.

We drive the same roads we’ve been driving for years. The car knows the way to go instinctually. In the early years we all used to go – Daughter A and D, and later baby H joined us as well. He grew up running the track at Open Gym, playing in the sand box and playing with the other siblings who would come with their autistic brother or sister. Eventually as the kids grew, because kids are wont to keep growing, one by one the siblings stopped coming. Daughter A stopped first, citing too much homework or wanting to do something else with her Baba. H dropped out of coming too a year or two ago, even as I tried to bribe him by saying he could drive his remote-control car or that I’d bring his bike with us.

Most Sundays it’s just D and I. Years ago I got over the resentment of my husband hardly coming or offering to take D so I could stay home. I realized soon enough that I wanted to be the one to go with D, to be outdoors and away from the house, to talk to my friends or just plug earphones in my ears, blast 90s grunge rock and rapidly walk the track to shake off the stresses and worries of the week.

The warmth of the air is just right today, cool enough that my headscarf doesn’t feel oppressive around my neck and head, but warm enough that nobody needs to wear a jacket. The sun peeks out intermittently, but mostly the clouds hang low and silent, holding the whispers of our secrets and conversations that cover the same topics year-in-and-year-out:

How is your kid doing? Yeah, I have to lock my pantry as well to stop him from eating stuff at all hours. The nights are better now though. New med is helping with the sleep. Did you get your ABA therapy covered? Did you hear about so-and-so? Yeah, she got remarried. I’m glad. I can’t believe how tall your kid is now! Yes, we just finished guardianship process.

After about 15 minutes of this, I pull out my earphones, bring up Song 2 by Blur on my Alternative Rock/90s Grunge station on Pandora and set off to walk a minimum of six fast laps around the track. I make it one time around before the repetition of it all brings all my emotions to the forefront.

There are the same three middle-aged guys out there who always come on these Sundays to throw a football and run up and down the field as part of their fitness regimen, I presume. The curly-haired one with the mustache takes off his shirt as he gets warmed up, as he has done year in and year out. We do the quick head nod to each other as I walk past them on the black top.

I round the bend and look down and there is the spot – the place on the track where four years ago in a fit of sudden rage and anger, D bent down and banged his head hard several times as I sprinted across the track to stop him. The moment that led to a series of doctor’s visits that became a cosmic injustice hurled against my firstborn, a tragic thing for which I still haven’t forgiven God. But that’s ok, because I’m sure He has forgiven me.

I turn my head to see where D is and find him on the other end of the track in his orange shirt that says “The John Maloney Project” on the front and the number 13 on the back. Two cheery blond girls flank him, and he is happy to have the female attention as he spins his wacky track on his forefinger. Isaiah, the young man who was D’s partner four years ago through his entire high school career, has since graduated and gone off to Georgetown University. I keep up with him on Facebook, and every so often he asks to hang out with D when he is home for winter break. That was one of the first true friendships D ever made through Open Gym. Isaiah invited D to his home for his high school graduation party, and during winter break from college he took D to Chik Fil-E for fries and then a walk.

As a mother, you don’t forget friendships like that – mutual friendships and not just someone being nice to D. D knows this, too.

I hold the tears unspilled in my eyes, hidden by the safety of my large sunglasses. Yesterday he was five and I was bringing him here. I had no expectations beyond him having a good time, getting some exercise and hopefully bonding with some older teens while I hung out in the background. Now he’s 18, blind in one eye, and his Baba and I are his legal guardians, having made it through the grand list of “things to do when D turns 18.” I don’t know how longer I will be able to bring him here. He’ll age out at some point, and that time is coming fast.

Six laps I walk, with the tears jostling to break free. But I refuse to let them. Because as Rob*, the resident Open Gym photographer crosses in front of me for the third time, camera in hand as he looks for opportunities to take pictures of participating students, as I watch D and his partners leave the track to go swing on the swings, as mustache man runs past me again and throws me a friendly smile, as the unique smell of heated turf and grass rises up off the field, “Alive” by Pearl Jam starts playing through my headphones:

“Is something wrong?” she said,

Of course there is.

Oh do I deserve to be?

Is that the question?

And if so, if so, who answers? 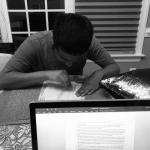 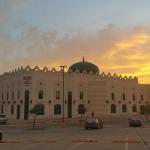 Muslim
An Autistic Ramadan - Dhikr in the Dark,...
Muslimah Next Door
TRENDING AT PATHEOS Muslim