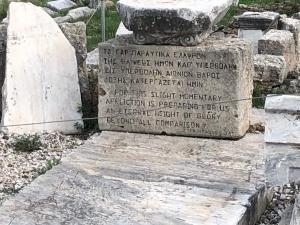 Then they sent some of the Pharisees and Herodians to Him in order to trap Him in a statement. They came and said to Him, “Teacher, we know that You are truthful and do not care what anyone things; for You are not partial to anyone, but You teach the way of God in truth. Is it permissible to pay a poll tax to Caesar, or not? Are we to pay, or not pay?”

And Jesus sat down opposite the treasury, and began watching how the people were putting money into the treasury; and many rich people were putting in large amounts. And a poor widow came and put in two lepta coins, which amount to a quadrans. Calling His disciples to Him, He said to them, “Truly I say to you, this poor widow put in more than all the contributors to the treasury; for they all put in out of their surplus, but she, out of her poverty, put in all she owned, all she had to live on.”

These two passages are separated in Mark 12 by three other interactions between Jesus and various people, but I believe that they are connected because they deal with our attitudes toward money. In the first part of the passage, some Pharisees and Herodians came and asked Jesus about taxes. “Is it permissible to pay a poll tax to Caesar, or not?”

It has always been confusing to me that Pharisees and Herodians would come together to Jesus to ask this question. Pharisees and Herodians didn’t have much in common. Pharisees were the “religious” folks who were interested in righteousness as reflected in following the Law of Moses. Herodians, on the other hand, were supporters of Herod, the puppet ruler of Galilee appointed by Rome. But as I reflected on this passage, I realized that what they were probably asking Jesus to do was settle a dispute between them. The Pharisees would have argued against paying tax to Rome – or having anything to do with the Roman government. The Herodians, on the other hand, wanted to work with the Roman government to protect the nation from further conquest.

Whether that’s the motivation for coming together to Jesus, the real reason was in order to trap Him.And what better subject to try to trap Him than money? Nobody liked paying the tax to Caesar, just as no one likes paying taxes today. If Jesus said that they should pay the tax, then perhaps the people would turn against Him.  If He said they should not pay it, they would have cause to accuse Him before the Roman government.

Jesus did not fall into their trap. Pay to Caesar the things that are Caesar’s, and to God the things that are God’s. All of us are subject to governmental authorities, whether we like it or not. And all of us are subject to God’s authority, whether we like that or not. The proper response of a disciple is to submit to those who are in authority over us, whether or not we view them as “righteous.”  (The only exception is if the government commands us to disobey God – an exception that is far more rare than we often seem to believe.)

That brings us to the other passage, the story of the widow’s offering. She is paying to God the things that are God’s. She obviously understands Psalm 24:1 – The earth is the Lord’s, and all it contains, the world, and those who live in it. But she also understands the promise of God to care for those who trust in Him, because she put in all she owned. I believe that’s why Jesus pointed the disciples to her example – because she modeled what it means to be surrendered to God.

It would be easy for us to minimize the widow’s gift by focusing on the amount. Mark tells us that she put in two lepta coins, which amount to a quadrans. The footnote in the NASB text says that a lepta was the smallest Greek copper coin, equal to less than one percent of a laborer’s daily wage. The quadranswas equal to two lepta; the quadrans was a Roman coin equal to about 1 ½ percent of a laborer’s daily wage. In other words, if you made $100 in a day, the quadrans would be worth about $1.50.

But the amount is not what matters; it is that she put in all she owned, all she had to live on. It’s easy for us to make a small gift – to God, to other charities, or even to individuals in need. (And we should make those gifts when God directs us to do so!) But how many of us would be willing to give God all we own?Are we more like the widow, or more like the leaders who came to Jesus asking for a reason to not pay taxes?

I know the two circumstances are not the same. But I also recognize that the Bible talks about money quite a bit. When it does, it almost always talks about it in terms of giving rather than getting. Why are we so willing to listen to those who tell us how much God wants to give us, and not to those who call for us to recognize that it all belongs to God?

Father, thank You for reminding us that the earth is Yours, and everything in it.  That includes us, and all that we have. Help us to hold loosely to the things You have entrusted to us, and to hold tightly to You. Help us to honor You in everything we do, that we may glorify You.  Amen.

November 3, 2022 "See to It that No One Misleads You"
Recent Comments
0 | Leave a Comment
"Larry, I'm certainly not an expert in addiction, but I have worked with a number ..."
Rick Rice “Far From It!”
"I wonder sometimes about the "willful disobedience of a known commandment" in drug addict--and that ..."
Larry “Far From It!”
"As I mentioned before, I quoted the NASB translation, which renders "apodote" as "Pay." The ..."
Rick Rice | Rick Rice
"I am using an on-line Greek text which includes variations in the text. As far ..."
Iain Lovejoy | Rick Rice
Browse Our Archives
Related posts from My Journey