The Problem Is, Most People Hate Themselves 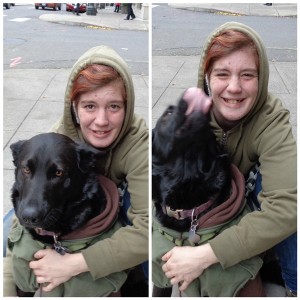 Brittany is a new friend of mine who lives outdoors with her big black dog, Padfoot. A couple weeks ago we talked for almost an hour, sitting outside a Starbucks. Her main teaching of the day was this: a big factor in the persistence of homelessness is that people get sucked into self-hate and can’t find their way back out. And that one of the most helpful things we can do is express our unconditional love for people no matter what their situation.

I met Brittany when she came to my downtown meditation group, and I was impressed with her intelligence and no-nonsense attitude. “Here’s someone,” I thought, “Who will tell it like she sees it.” I figured she’d have plenty to teach me, seeing as she’s been homeless much of her 30 years, beginning when she was only eight. Although I felt nervous about approaching her (as always, my mind leaps to possible rejection or negative reactions), I forced myself to go over to Brittany after our meditation and study session. I asked if she would be willing to meet me for lunch or coffee in order to talk. She replied, “Sure,” and proceeded to give me her cell number. Easy as pie.

We arranged to meet in front of the library downtown a few days later. I get there first and take note of a number of folks hanging around who are probably homeless. It seems a little silly, but I feel like I am suddenly a bit on the “inside” – I know one of them and she is coming to meet me. I feel just a little less alienated and separate than I usually do on the street in downtown Portland.

It’s a fairly cold day, so when Brittany arrives I ask if there is someplace where we can go sit inside even though we’re accompanied by her large and protective dog. “I don’t spend much time inside,” Brittany says. “But there’s a park not far from here.”

And so we stay outside, appropriately, although we do stop to enjoy the luxury of coffee and a place to sit at an outdoor table at Starbucks. We also have privacy, as no one else is enjoying their coffee outdoors.

I ask Brittany if I can record our conversation and she says sure. She clearly has no idea what on earth I want from her, but she’s game and seems to view me as harmless. Padfoot snaps at me when I try to pet her, and Brittany reassures her companion by saying, “Ah, Foot, it’s okay. She’s a hippie.” It makes me laugh inside; over a generation off, but the term gives me a glimpse of how I can be perceived as idealistic, odd, a little annoying, but mostly non-threatening.

I ask Brittany about her life and how she ended up the streets. “It’s not a pretty picture,” she begins. In a very matter-of-fact tone she then relates to me how a violent sexual assault in her early childhood threw everything off course, and how no situation in her life since then has remained stable for long. Her parents encouraged her to attend college and have a normal life, but, she says, “I never wanted it. I always felt trapped.” She tells her story easily and quickly, as if she’s told it many times before or she doesn’t give a crap what anyone thinks. It’s probably both.

“I’ve had children and cars and houses and jobs,” she continues. “I like the freedom of being outside. There’s nobody to tell me what to do. If I’m miserable, that’s my fault, not somebody’s else’s because I didn’t stay up to the program guidelines, or I didn’t go for a job, or get a house or something. I figure life will find a way. I want a house and I want a job, but I’ve had so many, I have to find something that truly attracts my passion or I’m not going to stick with it. Why get a box in a building when in 30 days you’re still outside? I figure life will give me the opportunity I want, and if I deserve it in here [she points to herself], I’ll go get it. Til then I’m happy where I am. A lot of people can’t handle that.”

I find myself thinking that I was attracted to Brittany in part because of her fierce self-sufficiency. This is not someone likely to keep pulling on my sleeve, asking for more and more, making me feel guilty and responsible for not making her life better. As we talk, however, it occurrs to me that, especially if you’re homeless, it’s better for your own mental health if you concentrate on how you’re responsible for your own situation. Dwelling on the injustice of it, or in what ways society keeps you down, is probably just not helpful.

I ask what Brittany thinks about homelessness as a social problem. “In this lifestyle the hardest thing is not hating yourself,” she answers quickly. “[Many people who are homeless are] people that hate themselves. They either have drug problems, or mental health problems, and they just get lost. Either they fall off the wagon or they lose their house or their support system runs away, and then they get lost, without retaining their individuality. That’s the hardest part – if you can find your self being homeless, you can get out of it if you want to. It’s just mostly people that don’t care enough about themselves to want to change.”

“Okay,” I say. “So what can we do about it – either to prevent people from becoming homeless in the first place, or support them once they are?”

Brittany doesn’t have to think long. “In the long run, just support people for who they are, no matter where they are in life. Having blind support from someone who’s going to be there for you, whether it’s emotionally, physically, over the phone, whatever, just somebody to reflect with? Nine times out of ten it grounds you. You’re able to put your thoughts, your feelings, your passions out there.”

“Getting people motivated to want to love themselves is the hardest part on the streets,” she continues. “There’s all kinds of organizations that do shelter, clothes, food, and all that stuff, and they say, ‘Oh, we’re helping the homeless.’ In the end, teaching them to love themselves again? That’s the bottom line. Most people hate themselves – for whatever they’ve done in the past, or wherever they are, some people lose themselves completely. They don’t wash, they don’t eat right, they get completely off the other end. Sometimes standing there and going, ‘Hey, I’m here if you need me,’ is the best thing in the world. Because even if they never need you, they remember you. When they’re way out down in the gutter,  it pops into their head and they go, ‘Hey, that random person thought I was worth it? Maybe I am worth it!’

I find myself inspired and convinced by Brittany’s point of view, although I am struck by its contrast to the ideas I encountered a week earlier at a “Creative Solutions to Homelessness” forum. The event had occurred just blocks from where Brittany and I are sitting and had been attended by mostly white, middle-class, well-meaning people like myself. There had been a number of very interesting breakout sessions, including ones on microhousing, social services for homeless families, legislative and policy solutions, and a dedicated fund for affordable housing. There were no sessions on directly and personally expressing love to people.

Brittany doesn’t claim to be a perpetual font of love and positivity. “I fall apart a lot,” she admits. “But I don’t let anybody see it.”

As if conjured up out of nowhere for dramatic effect, a small, beautiful woman appears next to our table toward the end of our conversation. She has pale blond plaited hair and is very thin. A short skirt and a small sweater don’t quite meet in the middle to cover her midriff, and she holds her arms around her as if to hold herself together. I find myself thinking she would fit right in to a clothing ad with other partially-clad, waifish models, but on a cold city street she looks very out of place. Brittany recognizes her.

“You sure, mama?” Brittany asks (she often calls any creature of the female persuasion “mama”). “You okay?”

“I’ve been worried about you lately.”

A____ moves slowly past us while maintaining eye contact with Brittany. It seems almost as if she were reluctant to leave but not up to the stress of interacting. She mumbles something I can’t quite hear.

“You’re welcome,” Brittany answers. “I love you even if… you know… you’re lost.”

A faint smile appears on A____’s lips and then she’s gone. Brittany calls after her, “Stay safe, mama. Okay? Be safe. Bye mama.”

Brittany explains to me that a year ago A____ had housing and was doing well. At some point she “got moved” and then got back into meth. “Now when I see her I just tell her I love her, tell her I’m here for her. Even if she doesn’t love herself, I love her. And that makes her smile – you saw that smile!”

Later, after Brittany and I have parted ways, I reflect on how much guts it takes to walk up to someone and tell them you love them. I wonder whether that’s because, deep down, part of us doesn’t love ourselves. “Why would this person want my love?” we think. In some strange way it seems presumptuous to offer it. If Brittany’s right, however, that love is exactly what’s most needed. 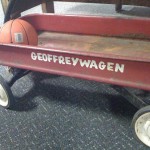 December 17, 2014
Questions Are More Important Than Answers
Next Post 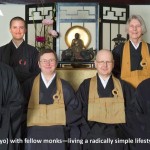