My Journey of Conscience
Buddhism 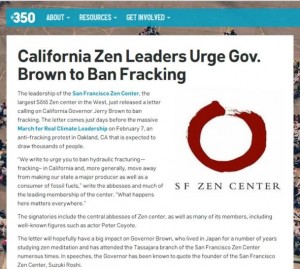 Last week one of the largest Zen Centers in the U.S. published an open letter urging California governor Jerry Brown to ban hydraulic fracking in the state. I was thrilled, but not all Zen folks will be, even if they agree on this particular issue. Speaking out as people of faith can be powerful, but it can also be divisive and confusing. When and where do we – as individuals and as faith communities – take a public stand?

I’ll offer this simple answer for you to chew on: we should take a public stand as people of faith when a situation becomes so extreme we can no longer tolerate it in good conscience.

We can’t use our faith to strengthen our position lightly. If we use it too often, it will have less of an impact. If we tie our faith to too many details – like how fuel efficient a car you drive, or who you vote for – it will create an oppressive culture of political correctness within our communities and  inevitably lead to divisiveness. Most decisions and opinions have to be left up to each individual to form according his or her own conscience. We can try to influence one another through dialogue, but for the most part it’s a good idea to refrain from telling people what they have to do or believe in order to be a good Buddhist, Christian, Muslim, or Jew.

At the same time, concern about weakening the authority of our faith or creating divisiveness may delay our speaking out when things have truly gotten out of hand.  Things tend to gradually worsen, so extreme situations can creep up on us while we’re not looking. Suddenly we find ourselves treasuring a faith that is completely inconsistent with what is going on around us.

As Buddhists we chant, “beings are numberless, I vow to save them all,” while the political and economic machinery around us propels us down a path that is leading to widespread suffering and destruction. As Christians we read that at the time of judgment Christ will remind us, “whatever you did for one of the least of these brothers and sisters of mine, you did for me,” while we participate in systems that richly reward those who already have money but grind down and crush those who do not. As a secular person with strong values we appreciate that humans depend on an infinitely complex ecological system, while we watch vast areas of the planet turned into wastelands in order to continue our dependence on oil. As Muslims we have been called upon to be upholders of justice while news of the shooting deaths of unarmed black Americans has become commonplace.

At what point has a situation become so extreme we have to speak out, and act, as people of faith? This question has to be answered by individuals and communities on a case-by-case basis, and can be quite challenging. However, just because it’s challenging doesn’t mean there isn’t a point where we need to take a public stand with every ounce of strength we have – and our faith is the source of much of that strength, so it will naturally be part of our stand. 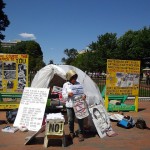 February 3, 2015
Three Ways Activists Alienate People - and What They Can Do about It
Next Post 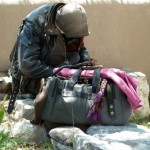 February 13, 2015 Back to the Drawing Board with Meditation for the Homeless
Recent Comments
0 | Leave a Comment
Browse Our Archives
Related posts from My Journey of Conscience