The conclusion of the Ruini report has been published by Vatican Insider.

Medjugorje, here are the conclusions of the Ruini report
The document Pope Francis appreciates: positive on the first appearances, much less on the present, proposes to turn the church into a pontifical sanctuary. The doubts of the Congregation for the Doctrine of the Faith that discussed the phenomenon in 2016

Thirteen votes favoring the recognition of the supernaturality of the first 7 appearances in Medjugorje, a vote against and a suspensive vote. The majority of suspicious votes and many doubts about the continuation of the apparition phenomenon from the end of 1981 to today. This is the end result of the work of the commission on Medjugorje established in 2010 by Benedict XVI and chaired by Cardinal Camillo Ruini. A document to which Pope Francis referred in the dialogue with journalists on the return flight from Fatima when he revealed the distinction between the first apparitions and the next phenomenon and said: “A commission of good theologians, bishops, cardinals. Bravo, good, good. The Ruini report is very, very good. ” The signal emerged from the words of the Pontiff, as is well known, is positive about spiritual fruits and conversions (“people who go there and convert, people who meet God, who changes life”), but is negative with regard to Apparitions that continue today: “I prefer my Mother Madonna, and not the Head of the Telegraphic Head Office, who sends a message every day”.

A commission commissioned by Ratzinger
From 17 March 2010 to 17 January 2014, a commission chaired by Ruini was set up for the will of Benedict XVI. In addition to the former chairman of the CEI, Cardinals Jozef Tomko, Vinko Puljić, Josip Bozanić, Julián Herranz and Angelo Amato participated. The psychologist Tony Anatrella, the theologians Pierangelo Sequeri, Franjo Topić, Mihály Szentmártoni and Nela Gašpar, the Mariologist Salvatore Perrella, the anthropologist Achim Schütz, the canonist David Jaeger, the speaker of the causes of the saints Zdzisław Józef Kijas, the psychologist Mijo Nikić and the official of the Doctrine of the Faith Krzysztof Nykiel. They had the task of “collecting and examining all the material” about Medjugorje and to present “a detailed report” with its vote about the “supernaturality or not” of the apparitions as well as the most appropriate “pastoral solutions”. The committee met 17 times, screening all documents filed in the Vatican, the parish of Medjugorje and also in the archives of the secret services of the former Yugoslavia. He heard all the witnesses and witnesses, and in April 2012 he had an inspection in the village of Herzegovina.

Positive Findings on First Appearances
The commission noted a very clear difference between the beginning of the phenomenon and its subsequent development. And he decided to express himself with two distinct votes on the two different phases: the first 7 presumed appearances between June 24 and July 3, 1981, and all that happened later. Members and experts came out with 13 votes in favor of the recognition of the supernatural nature of the first visions. A member voted against and an expert expressed a suspensive vote. The committee argues that the seven visionary boys were psychically normal, were caught upset by the apparition, and in what they say they saw there was no external influx from the Franciscans of the parish or other subjects. They resisted in telling what they had seen despite the police arresting them and threatening them with death. The commission also rejected the hypothesis of a demonic origin of the apparitions.

The doubts about the development of the phenomenon
With regard to the second phase of the apparitions, the commission took note of the heavy interference caused by the conflict between the bishop and the Franciscans of the parish, as well as the fact that the apparitions, pre-announced and programmed individually for the no-showers, continued With repetitive messages. These continue, although the boys had said they would have an end, actually never happened. There is then the theme of the “secrets” of the apocalyptic flavor that the seers claim to have been revealed to them since the apparition. On this second stage, the committee voted in two steps. Firstly, taking into account the spiritual fruits of Medjugorje but leaving aside the behaviors of seers. Here 3 members and 3 experts say there are positive effects, 4 members and 3 mixed mixed-minded positive effects and 3 other mixed, positive and negative effects members. If, in addition to spiritual fruits, account is taken of the behavior of seers, 8 members and 4 experts believe that one can not express, while two other members have voted against the supernatural

The Pastoral Solution
Having noted that Medjugorje’s visionaries have never been adequately followed by the spiritual point of view, and having noted that they have for a long time no longer formed a group, the commission has endorsed the end of the ban on pilgrimages organized in Medjugorje ( 13 members and experts on 14 present) and voted in favor of the constitution in Medjugorje of “an authority dependent on the Holy See” and for the transformation of the parish into a pontifical sanctuary. A decision given for pastoral reasons – the care of millions of pilgrims arriving, avoiding the formation of “parish churches”, clarity on economic issues – which would not imply recognition of the supernatural nature of the apparitions.

The doubts of the Doctrine of the Faith
Francesco spoke to him on the airplane. The Congregation for the Doctrine of Faith led by Cardinal Gerhard Ludwig Müller expressed doubts about the phenomenon and also about the Ruini report, considered an authoritative contribution to compare with other opinions and documents. In 2016 there was a “Feria IV”, the monthly meeting of members of the Diocese, summoned to discuss the Medjugorje case and the Ruini report. Each of the cardinals and bishops who are members has received the text of the commission but also other material held by the Congregation for the Doctrine of the Faith. During the meeting, members were asked to produce their opinions. Pope Francis, unwilling to have the Ruini report, which he liked, was put on “auction”, however, decided that the opinions of Feria IV members were sent directly to him. And that’s exactly what happened.

Francesco’s decision
After examining the Ruini report and the opinions of the members of the Congregation for the Doctrine of the Faith, the Pope decided to entrust to the Polish Archbishop Henryk Hoser a “special mission of the Holy See” to “acquire more in-depth knowledge of the pastoral situation “In Medjugorje,” above all, the needs of the faithful who come to pilgrimage “to” suggest any pastoral initiatives for the future. ” By summer 2017 he will deliver the results of his work and the pope will make a decision..

May 16, 2017
Visionary Mirjana Knows Exact Date When She Must Give Details of First Secret.
Next Post 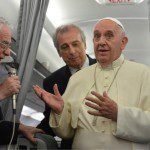 May 17, 2017 Is Pope Francis in fact secretly the "Protector" of Medjugorje? Did Pope Francis just "Troll" Mainstream Catholic Media with his recent comments about Medjugorje?
Recent Comments
0 | Leave a Comment
"the speed with which the former "atheist" "communists" of the soviet union became right wing ..."
crackerMF The Dogma Lives Loudly in Putin: ..."
"ahhh.. the completely untruthful church attests to the truthfulness of a fraud. how droll.sincerely,- nauseated"
crackerMF Crisis Magazine’s hack piece on Medjugorje ..."
""But no evidence of fraud or hoax has been uncovered and the committee members overwhelmingly ..."
crackerMF Catholic Media, Medjugorje, and the parallels ..."
"I am surprised that the author has no knowledge of the Orthodox world. At least ..."
Athanasios Ioannidis Holy Wars… Putin Prays at Mysterious ..."
Browse Our Archives
Follow Us!