Every second of the month, the Blessed Virgin Mary has appeared in Medjugorje visionary Mirjana and leaves a message for the world. Entering the year 2017, specifically January 2 Blessed Virgin Mary appeared again, but this marked the apparition and somewhat disturbing, but still amazing.

The video shows the apparitions to Mirjana that in an instant the apparition as it goes from this world to meet with Mary. This is evident on her face. Around visionary people standing in silence and pray. After almost two minutes and fifty seconds to hear the scary, satanic screams coming from close range.

Whose person frantically shouting: ‘go away’ with satanic prayers on old languages, but what is on the tape amazing is the fact that the visionary to the screams did not flinch, she did not even notice the difference from shocked the crowd by the cries responded even stronger prayer and tears.

-On This morning’s video, filmed during the Marian apparition to Mirjana, took place one of the most authentic evidence that the Madonna with us and that the visionaries during the apparitions are in another world!
Specifically the video, at 2:51, is one lady who is possessed and which was only 2 meters from Mirjana, began to scream, scream, swear, push and hit all around.
They all turned to her, calming it, prayed over it, and Mirjana did not even blink an eye, even with the shift, nor noticed it because it was of course to our Heavenly Mother! – Writes in the video description that visiting Croatia as evidence of the presence of St. in Medjugorje. 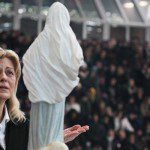 June 23, 2017
"Ultra-traditionalist" Catholic Returns from Medjugorje with Powerful Story - Opponent of Medjugorje Has Dramatic Change of Opinion After Witnessing Profound Faith at Shrine
Next Post

July 2, 2017 July 2, 2017 Medjugorje Monthly Message to Mirjana - Powerful Special Message "I am imploring you to pray for the whole world. My heart is suffering. Sins are multiplying, they are too numerous."
Recent Comments
0 | Leave a Comment
Browse Our Archives
Follow Us!