“Do you WANT to be made well?” Man, I Wish Jesus Wouldn’t Say Things Like That (a sermon) 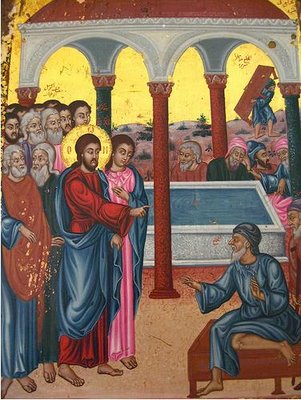 2Now in Jerusalem by the Sheep Gate there is a pool, called in Hebrew Beth-zatha, which has five porticoes. 3In these lay many invalids — blind, lame, and paralyzed. 5One man was there who had been ill for thirty-eight years. 6When Jesus saw him lying there and knew that he had been there a long time, he said to him, “Do you want to be made well?” 7The sick man answered him, “Sir, I have no one to put me into the pool when the water is stirred up; and while I am making my way, someone else steps down ahead of me.” 8Jesus said to him, “Stand up, take your mat and walk.” 9At once the man was made well, and he took up his mat and began to walk. -John 5:2-8

This weekend at the retreat we kept a running list of overheard quotes from each other. Here are a few for your enjoyment.  There was the person who said “I’m totally making my own deodorant now. Come smell my pits. I smell awesome”

And the guy who got the fire going who said “when you’re this flaming, who needs kindling!”

But the one that struck me was when someone said “There’s something satisfying about hating someone.” To which someone replied “Yeah, there’s definitely a pay off.”

I can relate to that.  When we seriously don’t like someone we like to think that we hate them because they are awful horrible no good people – and that might be true.  But if I’m totally honest, I have to admit that there also is a payoff to hating someone. Maybe I get to feel like a better person than them, or maybe then I don’t then have to look at what I did wrong in our relationship, or maybe I then don’t have to look at my own awful, horrible, no-goodness.

It feels gross to admit the truth about the payoffs we get from the things that harm us – because to do so feels perilously close to minimizing the very real pain and suffering that come from things that harm us.  But admitting that there is a payoff to hating someone who hurt me is not the same as saying that what that person did was ok. Or that my pain is not real.

And if we are honest, there are payoffs, not just to hating people, but to so many things in life that hurt us.

I mention all of this because in our Gospel text for today Jesus encounters a man who was ill and had been sitting at the pool of Bethesda for 38 years. And honestly this has to be the most insensitive healing text in the Bible, because Jesus asks him the really harsh question: “do you want to be made well?”  and the guy doesn’t even answer the question, when asked if he wants to be made well he says no one will help me into the water and when I try to get in other people get in the way.

I don’t want to be a jerk, but seriously? That’s the guy’s answer? Not to diminish his illness but it makes me wonder what the payoff might have been to staying ill since when asked if he wanted to be made well he didn’t seem very interested.

This is a sticky issue, but this week I started thinking about how hard it is to be honest about the pay offs we get from things we say we want to be free from.  You can ask any alcoholic in recovery about this. When I was still drinking I’d bemoan my hangovers and the fact I couldn’t manage to keep a decent job. But there was a payoff. I got to live without any real responsibility and do as I like no matter how it effected others and the best payoff was that I got to be inebriated whenever life or basic human emotions or the results of my bad decisions started feeling too bad.

It’s not just drunks though.  Not by far. Some of you spend money you don’t have on things you don’t need which boosts your mood until you get the bills which is then so depressing you have to start the whole damn thing over and shop some more just to boost your mood. All while you complain about how in debt you are in. It’s like clutching our bills by the side of the pool at Bethesda and having Jesus walk by and say “Do you really want to be free from the bondage of debt”. Jesus is just the worst some times.

Being honest about what the payoff is to staying in a situation I say I want out of is just more truthfulness than I feel comfortable with.  But that’s the kind of truth Jesus seems to always be putting up in my face when I read texts like this one.

It all reminds me of Paul’s letter to the Romans when he said I don’t really understand myself, for I want to do what is right, but I don’t do it. Instead, I do what I hate. Some things are so true they hurt a little

Here’s the problem. In this day and age we are understandably sensitive to the dangers of what we call blaming the victim. And I get this. There are things that happen to us that are surely beyond our control.  I didn’t have much of a part in having an auto-immune disorder when I was 12. Richard does not contribute in anyway to his own deafness. And to imply so is cold hearted.

So don’t mistake me.  What I’m talking about is situations like this:  there were a few months of my life I came down with a “touch” of hypochondria. We were living in Longmont and I was a stay at home mom with a baby and a toddler. I was exhausted all the time and got sick a lot that Winter and I started to think that something was seriously wrong with me.  And secretly, without being totally conscious of it, I really hoped something was wrong with me. Nothing fatal. Maybe like, a totally treatable form of cancer. And then I could kind of get a hall pass.  A break from everything.  A hospital stay started to look awesome.  Someone else would bring me food and I could lay around all day watching tv and taking narcotics. What’s not to love? After ending up in my doctor’s office for the 3rd time in 6 weeks demanding that he run tests on me since I was sure I was sick…my doctor looked me in the eye and said Nadia, nothing’s wrong with you.  You just have to deal with your life.

As a side note: I was so humiliated that I actually never went back to that doctor. But I also have never since then feared OR hoped that something was wrong with me.  I picked up my mat and walked out of his office.

Of course it’s not always like that. I wonder if that day when Jesus was walking along the pool at Bethesda  if there were many other people who were legitimately sick and lame and beyond help. There must have been.  I wonder if he saw this one guy. I mean, really saw in him what he could not see in himself.  I wonder if Jesus knew that this man had given up and knew that he could be made well. See, it’s a weird healing text because not only does Jesus say “do you want to be made well?” he doesn’t do the normal healing thing he just says “stand up – take your mat and walk”  Stop waiting for someone to carry you. Stop waiting for other people not be in your way.  Why? Because you can. I wonder if Jesus said: nothing’s wrong with you.  You just have to deal with your life.

In the face of Christ this man was confronted with the truth.  And that truth may have stung, like truth so often does, but it also set him free. But the fact that he was able to take his mat and walk away obviously had very little to do with his own desire to be healed. What it had to do with is God’s desire for his healing.

That’s God’s thing. Seeing us. Offering the truth. Restoring that which is broken.  Pursuing our healing long after we’ve given up. Loving us into wholeness. And wanting us to be made new, to be made whole, to take up our mats and walk.

So come to this healing place in front of you– no one has to carry you to this table of grace. And here there is no one to get in your way. Come to this table tonight and bring the mats you think you are stuck laying on and lay them at the feet of your savior who bids you walk and be free. Amen.

May 17, 2013 Sermon on Healing *(for clergy) that I preached at the Festival of Homiletics
Recent Comments
0 | Leave a Comment
Browse Our Archives
Related posts from Nadia Bolz-Weber 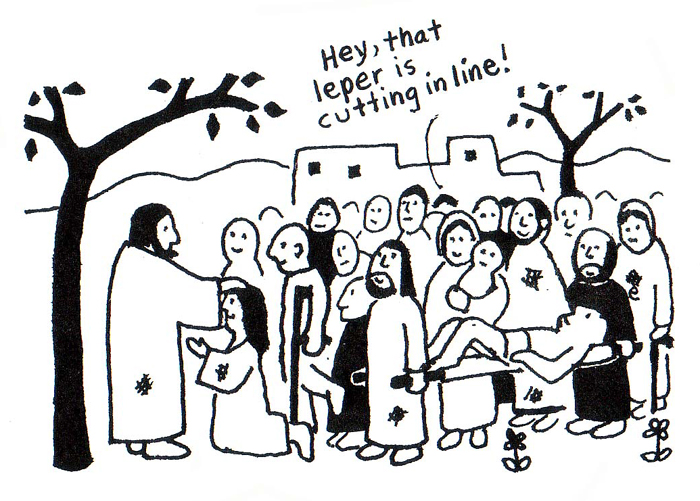 Progressive Christian
Sermon on the Parameters We Prefer For Jesus...
Nadia Bolz-Weber