A devastating Good Friday sermon from my friend Sara Miles 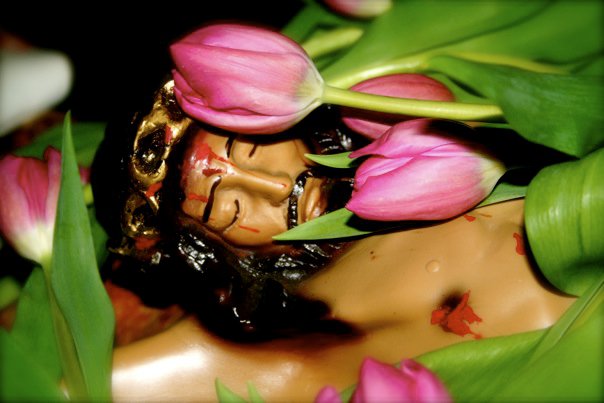 The following is the sermon delivered by my friend Sara Miles at our big-sister parish in San Francisco, St Gregory of Nyssa Episcopal Church on Good Friday, 2015 (posted with permission):

Last night Jesus fed us, and washed our feet, and then we left him in the garden, denying that we knew him. Tonight we gather at the foot of his cross. It’s Good Friday.

I’d like to pretend that Good Friday, the murder of God by the people of God, is a one-time historical event. That it took place far away, in another country, safely in the past. That someone very different from me—a Jew, most probably, or some crazy rogue soldier––was responsible for the crucifixion, and now it only happens elsewhere, at the hands of Muslim terrorists, and Good Friday just means another day in church with beautiful music.

But the crucifixion is ongoing. In our country, with its unholy racial divide, crucifixion for black and brown people means being arrested and bound, fitted with a noose, lifted high on the lynching tree as crowds cheer the spectacle. It means being railroaded to arrest, judgment, jail or execution. It means being beaten or asphyxiated or shot by vigilantes or police, with the murdered body left to lie in the street for hours as a mother screams.

It is impossible for me to avoid the ongoing reality of the crucifixion tonight, as we hear the words of Good Friday.

Here in San Francisco, where a Latino teenager was shot after two white adults called 911 to say he looked frightening, the word of Good Friday sounds like this:

Let us lie in wait for the righteous man,
because he is inconvenient to us;
the very sight of him is a burden to us,
because his manner of life is unlike that of others,
and his ways are strange.

Or in Albuquerque, where a dirty, mentally ill, homeless man was chased and killed by police, it sounds like this:

He had no form or charm to attract us, no beauty to win our hearts; he was despised, the lowest of humans, a man of sorrows, familiar with suffering, one from whom, as it were, we averted our gaze, despised, for whom we had no regard.

Good Friday sounds like the four prison guards on Rikers Island saying to the handcuffed, mute 25-year old whose jaw and teeth they broke against the concrete wall of his cell, “You will not speak to me? Do you know that I have the power to release you, and the power to crucify you?”

And then hear the silence.

Crucifixion is always an act of terror, meant to carry a message to the entire population that the rulers of the world are all-powerful, and can crush anyone they choose. In Jesus’ time, the cross meant not just punishment for criminals and troublemakers, but shame for their families, who were marked forever by the scandal. Being crucified was to be made into a public example: your pain and humiliation were complete; your body became so disfigured you no longer looked like a person; you were turned into a broken nothing. The mere threat of death on the empire’s cross led people to betray each other; it kept them in their places, separated and afraid to offer solidarity.

And it still does, evoking our deepest fears of being cast out, mocked, hurt or violently erased, stigmatized by association with the wrong people. Today’s forms of crucifixion leave me afraid to care for the imprisoned, afraid to challenge the violent, too busy or guilty or helpless to even stand next to the families of the dead and weep.

And so the only good word we have on Good Friday is Jesus, who speaks to us from that terrible place. Jesus comes in frail mortal flesh like our own, to all those who, persecuted by the state, refuse to abandon their humanity; to all those who, entrapped into carrying out the empire’s dirty work, despair; to all those who lament their murdered children and their devastated people. Jesus confronts the rulers of the world who wield deadly force, speaking the word of God’s liberating love: “You would have no power over me, unless it were given you from above.”

Death has no power. In the unbearable light, the dark epiphany, of the crucifixion, the word of Good Friday sears and convicts us and frees us. It does not let us relax into passivity, or hopelessness, but invites us to simply cling to the power of his cross. Our guilt is a waste of time: it will not save anyone. Our brilliant political analysis, our righteousness, our good intentions are useless: we cannot save ourselves. All we can do is witness and receive what Jesus offers on Good Friday.

We must witness the crucifixion––of Jesus, of Jessica Hernandez, of Michael Brown and Tamar Rice–– without running away, or pretending it’s not real, or that we’re not responsible. We must look upon the one we have pierced, without flinching.

And we must witness how, lifted high on the lynching tree, Jesus gathers all people–– the corrupt judges, cynical torturers, bored soldiers, scapegoating crowds, condemned thieves, cowardly friends and devastated followers––to himself. What he says is: forgive them all, Father. And then he breathes the Spirit on us: Woman, he says to Mary, behold your son. And to his friend: Behold your mother.

This is the good news of Good Friday, and the radical challenge of the resurrection. Jesus, with his broken body, breaks down the walls that divide humanity, and makes us into a new family, children of God. And if we are to remember his death and enter his life, we must take up in a new way the familiar human cross of being a son, a mother, a friend. We must turn to and claim each other––neighbors, strangers, enemies–– and refuse to be separated. Alex Nieto’s mother is my mother, and Darren Wilson is my son. Because nobody is outside this family, for whom Jesus was willing to be betrayed into the hands of sinners, and suffer death upon the cross.

He has given us to one another. Let us love one another as he has loved us.

April 2, 2015
Do you have questions about the cross?
Next Post