up against religion September 25, 2012 David Hayward 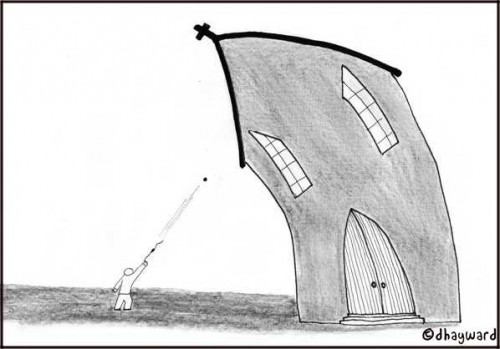 Ya, sometimes this is how I feel. Little David with a pebble up against an ancient giant!

You know, that church building represents religion, and I meet plenty of negative religion outside of church walls as well. In fact, some of the most ferociously religious people I’ve met have been outside the church.

The kind of religion I’m up against is the kind that taunts and degrades people, attempts to control them, manipulates them and shames them, that limits rational thought, critical thinking and intellectual integrity, that demands blind adoration of empty leadership and unquestioning subservience.

That’s the kind of religion that needs to come down! I’m still trying to find the perfect pebble perfectly placed.

September 26, 2012 your closet
Recent Comments
16 Comments | Leave a Comment
Browse Our Archives
get the latest from
Progressive Christian
Sign up for our newsletter
Related posts from nakedpastor