Envision, Plan and Make Your Escape

Envision, Plan and Make Your Escape

Our absolutely unbelievably amazing online community, The Lasting Supper, is entirely made up of escape artists: people who’ve escaped or are in the process of escaping from unhealthy churches, relationships, jobs and other unhappy situations. (I warmly invite you to come and join us.) Today I want to share with you some observations I’ve made from my own life as well as the lives of my friends about escaping.

My Sophia series of 52 drawings, in a nutshell, is the story of my soul out of feeling trapped to feeling free. Sophia, Greek for “wisdom”, is my treacherous but necessary journey to spiritual independence. I was pleased that so many people, especially women, identified with her because it captured their own journeys as well. Many feel trapped, not just in religion or its institutions, but in unhealthy relationships, bad jobs, or other unhappy circumstances. There are tons of people who are sadly oppressed and living under the control, power, manipulation and abuse of others. Sophia is a young woman who, even though under brutal treatment, makes her escape. It takes courage, good timing, luck, blessing, whatever… for things to work out. But over time I’ve noticed similarities in peoples’ stories of why they couldn’t escape. I know these intimately because I’ve been there.

When someone disobeys what they’ve been taught in these situations, at first they might feel guilty. But in time they realize they were being handled by an ideology that was created with the intention of keeping them subservient. Once you live defiantly, you will see that these concepts of staying in church, staying in a marriage and staying in a job even if they’re bad for you were created precisely to keep you there and maintain stability. If you’re being hurt, controlled or even overruled, then it is your right and responsibility to sue for peace, fight for freedom, and establish your independence. I know now that those rules that the church used were actually fear tactics to keep me.

2. I can’t: Some people are so oppressed that they feel they’ve lost every ounce of strength it would take to set themselves free. They like the idea of freedom, but don’t have the power to achieve it. They are tired, discouraged and disheartened. Paralyzed. Hopeless. They just don’t feel they have what it takes to escape.

Yes, you do! You wouldn’t believe the strength that wells up within once you set foot on the path of freedom. The depression and sense of paralysis your oppression gives you cannot be the gauge you use to determine what strength you have for your freedom. They come from different wells. As soon as you make the decision that you are going to be free, a new kind of energy will suddenly spark within you and give you all the strength you need to achieve it. I know this from my own experience. Feeling completely beat down by years of struggling against the machine and feeling like I didn’t have what it takes to be free, suddenly, one night in a flash of decision, I knew I was going to escape. I suddenly felt renewed strength and had a vision of how I was going to do it. And I did. I was a new man with renewed strength.

3. I won’t: There are some people who count the cost of their escape and realize that it might be too great. Israel pined for their slavery in Egypt again because at least there they had leeks and onions. Sure, they paid for their food with their lives. Their bodies were grist in the mills of the Egyptian regime. But at least they ate! So many people stay in oppressive churches, relationships and jobs because there is a trade-off. I can understand this. For example, when I left an international ministry, I realized I was giving up a good salary, good friends as well as a sense of purpose that I enjoyed. It was really hard to give that up. The sacrifice was huge.

But the Israelites could trade up the leeks and onions for milk and honey. I know this is true for so many people who give up the perks of an unhappy situation. What they get from their own freedom and independence is far greater and far more satisfying. There is something much richer about feeding yourself good food than being fed mediocre food. After escaping from several unhappy situations and relationships, looking back I realize I did the right thing. Sure, I had to spend some time wandering through the desert to get here. But I’m far happier now than I’ve ever been. It was worth the trip! That’s because I took the risk of turning in a fair life for a better one.

4. I wish: Often there are people who would really like to escape, but just can’t see how to do it. Like Sophia in this image, she finds a trap door underneath the straw in her cell. While her captors are playing their games she makes her escape. Wouldn’t that be wonderful if a trap door suddenly revealed itself to you and you could slip away just like that? But your oppressed life is so limited, restricted, controlled and confined that you simply can’t see a way out. Your oppressor has made you so dependent upon them that you can’t even imagine a life without them. You would love a trap door to appear, but it sounds too good to be true.

In fact, if you look for it, often it will appear just in that way. That’s how it happened for me every single time. Once, I felt so hopelessly trapped that I simply could not figure out what to do and fell into an overwhelming depression. Trapped! Then one night I had a dream in which a way out was shown to me. The next day I felt like a free man, acted like it, and took the steps revealed to me in my dream. Within a couple of weeks it was all finished and I had a new lease on a new life! That’s happened to me many times because I believe freedom is my right, and often what is good and right manifests itself to us when we look for it, welcome it and take it.

5. I’m scared: It is very scary to be free. It means being independent. It means no longer depending on your handlers for everything you need. Self-reliant. Often with some churches, relationships or jobs, they make it so that you can’t imagine life without them. In fact, they tell horror stories about those who’ve tried to escape before, only to end up in the arms of Satan, another abusive lover or alone forever, or a worse job or even unemployed. The threats are always the same: spiritual, relational and financial poverty.

Simply don’t believe them. They are lying. Just like the witches in the forests concocted to keep you out of them, they are lies told to keep you. It is hard for the mind to dismiss these threats and monsters because we used to believe them. They were really real. It’s terrifying! But once you get past the fear and travel over the land that was supposed to be haunted and you realize nothing was there but rumors, then your courage will build, your wisdom will restore, and you will enjoy your newfound freedom and independence. You will probably, as I have, find a new level of wealth in your spirituality, your relationships and even your life.

I hope this helps some of you who feel trapped and want to escape. Trust me. I’ve been trapped many times. I’ve escaped every time. I’m free. I’m independent. And you can be too!

* Again, I really do invite you to come join other escape artists at The Lasting Supper, where you can share your story and receive great ideas and support!

** Also, if you want to purchase some Sophia reproductions or even an original drawing, go to my online gallery. 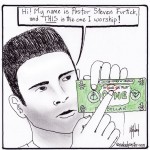 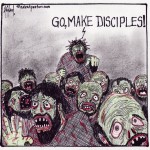