I am familiar with Pentecostalism and the charismatic movement including the Vineyard movement’s particular flavor of it. I spent many years in the charismatic movement, serving it in various capacities, even attending a Pentecostal Bible College. In seminary I studied under my mentor, Dr. Gordon Fee, a Pentecostal and one of the most respected text critics and biblical scholars in the world. In Charisma News you can read Michael Brown’s “final appeal” to MacArthur which I thought was direct, clear and fair.

I’m also familiar with the Reformed movement. During my religion and ministry program at Presbyterian College at McGill University in Montreal I joyously immersed myself in reformed studies. When I graduated I was surprised but pleased to receive the prize in Reformed Theology. It was no big deal but I appreciated the fact that my seriousness about reformed theology was recognized. Then I was ordained by the Presbyterian Church in Canada and spent many years serving reformed churches. Karl Barth is my favorite theologian and probably will remain so for the rest of my life, hands down.

I’m sharing this is to show that I’m not just talking from the sidelines as a bystander but as someone who has had a lot of experience and education in both traditions and still embraces a respect for each while feeling free to critique both.

As I watched the video I felt a growing anger as well as a disgust for what MacArthur was saying and how he was saying it. His speech is as lofty as his demeanor. His criticism of charismatics is as old as the charismatic movement itself. So it’s nothing new. It is a familiar flame. What I found dismaying is his complete dismissal of the movement and all its adherents in a single one hour dignified gesture. With one speech he purged the rolls of salvation of over 500 million believers.

Basically his argument is that charismatics dishonor God. Since they are therefore not in Christ, their theology is demonic. So since they are serving Satan and promoting him, there is a hotter hell reserved for them. He claims that the charismatic movement has done nothing to advance sound doctrine or biblical theology but in fact has caused more damage than anything else ever has because it has only delivered confusion, distortion and error to the church. He questions the church: You have always defended God. You have always defended Jesus Christ. Why do you not defend the Holy Spirit? Instead, the church opens the gates to the charismatics and they have taken over the city of God and set up an idol in its center. He doesn’t understand why God doesn’t just strike all these people down. He sadly supposes his ways aren’t our ways.

Here’s my response to MacArthur in defense of the charismatic movement and its adherents.

I’m not just angry. I’m not just disappointed. I’m sad. After watching MacArthur I was tempted to throw in the towel. Even though many people would distance themselves from MacArthur and his position on charismatics, it’s still a sign that the church and its leaders may use anything at their disposal to elevate themselves above their brothers and sisters, even if it means separating themselves from them forever.

I thought we were better than this. 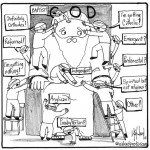 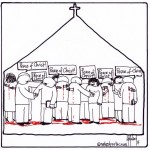