join the church and get a free set of knives

join the church and get a free set of knives October 19, 2013 David Hayward

My post yesterday, John MacArthur sends 500,000,000 Charismatics to Hell in Just One Hour got a lot of attention.

Then Mark Driscoll’s gimmick of crashing MacArthur’s “Strange Fire” conference. He was handing out his book on the gifts of the Spirit at MacArthur’s conference where they were criticizing them. Driscoll tweeted that MacArthur confiscated his books when MacArthur’s team claims Driscoll wouldn’t take them but left them. They even offered to carry them back to his car but Mark declined and left.

If you want to see what I think is the best business gimmick of all time, check out founder of Virgin Richard Branson’s stunt against British Airways. BA failed to erect the famous London Eye on time. Quickly, Branson sent up a blimp with this on the side: “BA Can’t Get It Up”. Simple as that. They were competitors, but it was in good fun. It clearly thrust Branson into the spotlight in a competitive but fair way.

A lot of the competition that is going on in the name of religion or Jesus Christ is not so good humored. Even though I’m involved in the game, I encourage people to be direct but also kind. Whenever I do a cartoon or a post I always imagine meeting whomever I am critiquing after it is published. Will it be a comfortable meeting? Will I regret having posted the cartoon or post? Also, I critique the person’s ideas, words or actions. I hope I forever succeed in not condemning the person.

Hey! If you want a community that doesn’t have knives, or at least doesn’t use them, consider joining our online community The Lasting Supper. 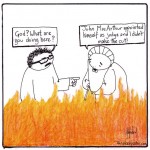 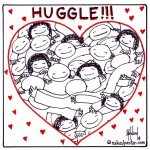 Jan. 27 Flashback: Your mama
This blog is older than that Five For Fighting song that panicked...
view all Progressive Christian blogs
What Are Your Thoughts?leave a comment
Copyright 2008-2021, Patheos. All rights reserved.