Maybe someone has already said this. With conviction. I wouldn’t be surprised. Funny thing is I created this tee as a joke but there a lots of people who would wear it proudly.

Because it is faithfully and frequently taught in the churches and at least practiced and people are reminded weekly. Even yesterday Pat Robertson was told by an elderly woman that her husband has such high medical bills that they need to use the money to pay those. He told her that if they were faithful tithers and rebuked the Devourer, then they wouldn’t even get sick and have medical bills.

Even though I had tithed for decades, I never believed in its magical powers. And I certainly never taught it.

Please don’t ask for this t-shirt. It’s a joke. 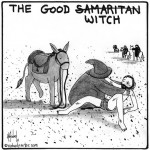 October 4, 2013
a comparison of Wicca with popular Christianity
Next Post 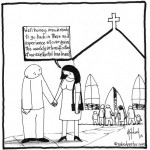 Mansplaining in the Bible, and a...
Freelance Christianity
Related posts from nakedpastor