a comparison of Wicca with popular Christianity

*** No this is not Gandalf the Grey. Nor do everyday witches dress like this. But you get my point. You can order a fine reproduction of “The Good Witch” cartoon HERE.

In the summer of ’99 I went to see The Blair Witch Project. I have this interesting ability to sink right into a movie, and it terrified me. When I left the theater I had a curiosity about witchcraft. So I went to our local bookstore and a new release by Silver Ravenwolf, “Teen WItch: Wicca for a New Generation”, was on the shelves. She wrote the book intentionally to appeal to curious young readers and their parents who might be bewildered by their child’s choice to follow Wicca.

The overwhelming similarities between what I read about Wicca and popular Christianity were impressive. So I decided to preach a sermon on it. That was in August of 1999. My thesis was that much of popular Christianity is practicing witchcraft. Or, in other words, they share beliefs and practices. It didn’t go over well.

A lot of time was not spent dissecting and analyzing Wicca and drawing philosophical and theological parallels between the two. What I did was simply read quotes from the book. We are smart enough to recognize parallels. So that’s what I’m going to do here. I will give some of my own ideas, but I mostly just want to expose the overwhelming similarities between the two and let you draw your own conclusions.

I will make this assertion however: Wicca, like all religions, is one attempt to understand and explain the intersection of the immaterial with the material. This is not just a religious endeavor, but a human one in which religion is involved. Like the Z-Theory tries to articulate, there is the immaterial (some call “spiritual”), and then there is the material (physical). How these two relate is the preoccupation of religion. Every religion has its own story explaining the association of these two realms or realities and their engagement. Even atheism, with the use of the sciences and their never-ending pursuit of discoveries, and even though it might reject the concept of spiritual or immaterial, endeavors to unite the undiscovered with the rational and practical.

Wicca, in its own way that is both unique and comparative, endeavors to understand, enjoy and use the merger of the immaterial with the material. In keeping with the 3-fold structure of the z-theory, it has an understanding of the Source or the Divine (“God”). It also has its own ideas on how this has been manifested or made known (nature). Finally, from this it has its own idea how this should be applied to the world and to people. That is, it has its own ideas of ethics and community.

How it compares to popular Christianity is that there is an attempt to understand and articulate the Divine. It uses what revelations have been supplied to assist in this attempt. Whereas Christianity uses Jesus and the bible, Wicca uses nature, its own various texts, and personal revelation (while not dismissing Christ). Finally, like much of popular Christianity, Wicca intentionally searches for ways to direct this power to receive and to accomplish good in the world.

Ravenwolf is clear right from the beginning. Like any introductory book on Christianity or a primer on Christian apologetics, she states the purpose of her book:

So let me proceed to give you some interesting quotes. I will make some minor observations along the way.

Ravenwolf is gracious and patient. She does not want to force her opinions on anybody: “You cannot force any human being to believe in God; they must come to God on their own terms.” So the whole book is read like a gentle invitation.

What I see happening in popular Christianity is that it has become a means to an end. Its greatest selling point now is what it can do for you and how it can improve your life. Wicca is no different:

Teens also want to know what Witchcraft really involves, and how the religion of the Craft can help them attain their dreams… Witchcraft depends on your positive self-growth. The religion concentrates on making you a better person so that you, in turn, can help others… Witchcraft is an earth-centered religion focused on raising an individual’s spirituality.

Here is Ravenwolf’s one-sentence “theology” statement that she claims could apply to any positive religion such as Christianity, Buddhism, Islam and Judaism:

Witchcraft is a nature-based, life-affirming religion that follows a moral code and seeks to build harmony among people, and to empower the self and others.

She says that “we see everything on our planet as a manifestation of the Divine.” She uses an analogy that I’ve heard in many churches and that I might have used myself. God is a “big, beautiful diamond with many facets. Each facet of God… manifests as a positive religious belief. Witches see themselves as one of those facets on that diamond.”

Did you know that the witch’s hat symbolizes the “cone of power”? The base is “love”. One side is “Creativity” and the other side is “Spirit”.

They also pray: “We pray all the time. Prayer helps people. We know that focused prayer represents great power.”

They also believe in a kind of karma. The Christian version is sowing and reaping. They have a chant: “Ever mind the rule of three, what you give out comes back to thee.”

Generally Wiccans, like many Christians, believe that the human being is made up of three parts: physical, mental and spiritual.

Many witches practice daily devotions where they take at least 5-10 minutes each day to reaffirm their faith and talk to Spirit. Here is one of their prayers (remember that Wicca emphasizes both the male and female aspects of the Divine):

I said this prayer in the service (minus “Lady”) and asked people who they thought created that prayer. They guessed St. Fransic of Assisi and St. John of the Cross and Mother Teresa, etcetera. Some turned red and nearly fell out of their chair when I said it was a prayer from Witchcraft.

Wicca has its own clergy. High priests and priestesses counsel, train and teach “like ministers and priests in other religious structures.” They even have liturgical aspects such as lighting candles and receiving communion of bread and juice at their meetings. They believe these “aide us in manifesting our petitions.”

The primary goal of Wicca is this:

Our prime directive involves making ourselves better people, enabling us to throw off the chains of past difficulties, unhappy circumstances, and unfortunate situations and… to rise and blossom into spiritual people who gently persevere, rather than wanting the power of others.

A huge part of Christian culture believes that if our faith in God is strong and that we truly believe, that this combination makes prayer effective and miracles possible. Wicca shares this theology. Ravenwolf claims that “magick”, which is simply Witchcraft’s spiritual practice, “requires belief in a higher power, and faith in yourself.”

The similarities are unmistakable with some forms of Christianity that casts out evil spirits or just evil and resists the flesh, and invites and welcomes the Holy Spirit and encourages all things spiritual:

In a way that resembles some Christian pastoral care, Ravenwolf says,

All things happen to us because a) we created the problem in the first place, and now we are dealing with the consequences; or b) there is a special lesson that Spirit wants us to learn.

She also explains why some prayers aren’t answered, again sounding like a caring Christian pastor:

Sometimes Spirit does this to protect us, and other times Spirit knows that we have bigger missions, larger goals, and more important activities that we should be doing.

That’s it for the quotes.

So you can see the undeniable similarities. Yes, theologically, there are differences. But simply replace some of the words and tweak some of the style and you’ve pretty much got identical twins.

The z-theory from a Christian perspective asks the question: “How is Wicca like Christ?” In other words, how is Wicca an incarnation of the Divine? Then it embraces the similarities and rejects the differences.

But I claim the deepest similarity is the belief that we can manipulate God’s power to benefit ourselves and change the world. And this, I claim, is the philosophical crisis facing both Wicca and popular Christianity. It has a supernatural belief in magic and that we can get what we what through the rightly divined means. There is this fundamental belief that if we can possess a pure, strong, selfless faith and believe in God enough, then we can somehow marshal God’s will to achieve his and therefore our godly desires.

Even though Wicca and popular Christianity undeniably carry incarnational aspects of Christlikeness, this idea that we can exploit divine power to our own end, no matter how lofty, is where Witchcraft shares the same bed with all other religions, including popular Christianity. 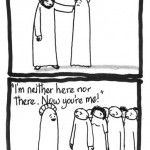 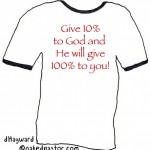