Want to laugh with others? Come join The Lasting Supper!

So the new Noah film is coming out with Russell Crowe. At first I rolled my eyes because it seemed to promote the biblical Noah as an historical person. But I’ve heard that one of the film’s prominent themes is the environment. So now it’s piqued my interest.

But my first thought was: How could the pre-flood population, which I presumed would have been small, be a threat to the environment? So I followed the bunny trail and found this post that claims the pre-flood population was between 5 and 17 billion people who were as technologically advanced as we are now. People believe this.

I remember being captivated by reports of Noah’s ark being found and looking at architectural representations and replicas of the ark. I wanted it to be true because I needed it to be true.

The National Geographic even posted an article Noah’s Ark Found in Turkey? in April of 2010. The very first line of the article is:

“A team of evangelical Christian explorers claim they’ve found the remains of Noah’s ark beneath snow and volcanic debris on Turkey’s Mount Ararat.”

Buy a print of this cartoon! 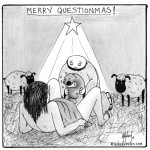 December 14, 2013
Jesus didn't come to bring peace but a question
Next Post 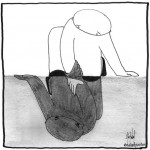