I read Haggard’s article, “Suicide, Evangelicalism, and Sorrow” with interest. It is really quite a confession as well as an indictment. His honesty and transparency, as well as his humility, really shine through the post. The level of healing that he has successfully integrated into his life is very apparent in the intelligent way he communicates his struggle. He also exposes, unintentionally I think, his pastor’s heart who really cares for those who are obviously suffering unspeakable agonies.

By the end of the post I felt disappointed that he didn’t quite articulate the central problem in the church. I believe he knows what the problem is but has just fallen short of saying it because, alas, it is a perplexing one. In a predictable evangelical analysis, Haggard hopes that a better understanding and application of the Gospel is the solution:

“I think we have a core, fundamental, essential problem with our application of the Gospel. We need to re-read the New Testament and modify some of our interpretations. The Bible is true. God is faithful. But at this point, too many are missing the mark.”

I think the problem goes deeper than that. I suggest it is a human problem. The complexity of the religious person is the issue and it is best not to be naive about it. Here’s one quote from his post:

“I think there are very few hypocrites in our pulpits or on church staffs. I believe most people in ministry are sincere followers of Christ.”

That is one side of the problem that Haggard recognizes. Here’s the other side that he also recognizes:

“But I did not mention the proud, envious, gluttonous, angry, greedy, blamers and scrutinizers in the body of Christ who have equally fallen but their sins are acceptable in our culture so they do not even realize their sin or need for repentance. Why? They are too busy with the sins of others. Often we actually laude these Pharisees and Judaizers because of their stand against sin, not realizing that they are still not teaching us the New Testament solution to mankind’s sin problem. When the New Testament becomes Torah in their hands, that law, too, stimulates sin.”

“Since the primary motive of the evil is disguise, one of the places evil people are most likely to be found is within the church. What better way to conceal one’s evil from oneself as well as from others than to be a deacon or some other highly visible form of Christian within our culture. I do not mean to imply that the evil are anything other than a small minority among the religious or that the religious motives of most people are in any way spurious. I mean only that evil people tend to gravitate toward piety for the disguise and concealment it can offer them.”

I would change Peck’s emphasis. The greatest motive of religion is disguise! The greatest function of religion is to conceal evil not only from others but from ourselves. If we perceive that this is the same greatest motive as evil then we begin to see the complexity of our problem. So I would go further than Peck and assert that this does not just apply to evil people trying to conceal their guilt with religion, but with all people including sincere ones. In other words, religion allows us to be sincere and sinful at the same time. Even though religion promises transformation, it actually saves us from having to do it. You can look transformed while you stay the same. I agree with Haggard: almost every pastor and church leader I ever met were very sincere followers of Christ. But I would go further than Haggard and assert that at the same time these sincere followers of Christ were the problem. While meaning to do good they wreaked havoc in the lives of people.

This is the problem Haggard flirted with: the church is precisely the epicenter of where this hypocrisy occurs. The problem is not more bible study or more personal application. The problem is we need to be more self-aware and more honest with ourselves. I also claim that this will not solve our problem but only make us aware of it, which in itself is the solution.

I believe that religion is like a cloak we all wear either to cover our shame or conceal our intentional sin. The answer is not to purify the church of Pharisees because I think many of us would sadly admit there’d be nobody left. Rather, we need to become more self-aware of our own inner personal Pharisees, be honest about it, and thereby make the church a safer place to be a human being.

(*** You can acquire a fine art reproduction of this cartoon as well as lots of other art in my gallery!) 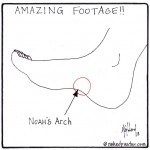 December 15, 2013
shocking new footage about the biblical Noah
Next Post 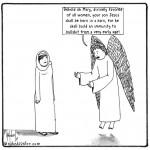 How come I can't see you...
slacktivist
Related posts from nakedpastor