A Magical Reading of UU Initiation: One Woman’s Ordination

Rites of passage are essential expressions of culture. Every culture has markers of significant life events. Some of those ritual moments mark passages through which we all go—birth and death. Some are offered only to a few, whether as the result of class, race, education, or subculture. Initiation, that word we sometimes use to mean, “beginning,” also describes a whole range of ceremonial and transformative experiences. We may mean the welcome of a child into the community—an initiation for the parents at least as much as the child! We may, as in Islam, mean a profession of faith and commitment to a particular way of life. We may mean Judaism’s rites of conversion, beginning with the ritual bath, and ending with the community’s celebration of oneg. We may mean the expression of consecration by those who take the vows of poverty, celibacy, and obedience in Roman Catholic and other religious orders. In some moments, we may mean funerary rites, those initiations of the members of the community into new life without our living presence, as well as initiation of the deceased through the doorway of which we can see only one side.

For Pagans, however, when we say, “initiation,” we more often mean an interior transformation which may or may not be accompanied by community rituals. We may experience initiation alone or in community. And we may argue ad infinitum about whether or not solitary initiations are “valid” or not. I am not writing this piece to settle those arguments, but rather to discuss one example of one Pagan UU’s experience of initiation, that of ordination into the Unitarian Universalist ministry. In our larger UU tradition, we celebrate with several rituals: These may include blessings of children, teenagers, graduates, those adults uniting in committed relationships, those taking on formal service to our tradition through ordination, and the dead and those they leave behind.

Among our ceremonies, it is the rite of ordination that carries the weight of governance. It is the congregation who ordains, not the denomination, not a senior colleague, not any other religious person or constituted body. This right to ordain is part of our way of governing, called “congregational polity.” This polity means that each congregation—in faithful understanding of covenant with the Association—has the right and expectation to govern themselves.

This governance includes ordaining our own ministers. I was ordained last month by All Souls Church, Unitarian in Washington, DC. The congregation that midwifed my UU ministry welcomed me into the rite of passage that is ordination. I share with you today the ways in which our practice of ordination reflects the practices of many other rites of passage. Practices which some people call the Hero’s Journey. While the specific order and the particular elements change, as they do for any initiation, I find it compelling to look at my experience of ordination–that most contested of UU initiations–through the eyes of a Third Degree Priestess in the tradition of Stone Circle Wicca as well as those of a now-ordained UU minister.

Silence, Aloneness, Darkness: One among the Blessed Many

Throughout the first half of the service was like most other services. Hymns, readings, offering sermon, prayer. I, the ordinand (such a fun word—it means the one who is in the process of ordination), was silent. There was no separate role for me. I was part of the congregation, the assembly from which I was to be called out. I was among the assembly, and yet I was alone. This aloneness and silence corresponds to the work that a dedicant (in Wicca) or a postulant (in Roman Catholic religious orders) does before coming to make vows. The Silence is also symbolic of the years I spent in the congregation and yet apart from it, studying, working, doing the tasks of ministry as a student minister. The Silence symbolizes the years of the congregation’s work and my solitary “heavy lifting,” the place of ordeal.

The Transformation Begins: The Rite of Ordination

For the formal Rite of Ordination, I am called out of my place, called both out of the assembly and out of my aloneness and silence. I am called into an examination of sorts, a test. Am I ready? The President of the Board asks. Will I fulfill the gaeas laid upon me by the congregation? What do I promise? Upon my last answer of this collection of words—the first I have spoken since the service began—the President-as-psychopomp (leader from one world to another) turns to the congregation gathered to ask for their magic. Their magical powers of transformation. With their words, the words of the members of All Souls Church, Unitarian, they begin the process of transformation that will last the rest of my life. “We hereby ordain you…” We ordain you. We ordain you into the Unitarian Universalist Ministry. 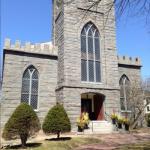 May 21, 2015 The UU Church and the Secret Pagans
Recent Comments
0 | Leave a Comment
"I love this! I've been in such a funk lately, feeling off-kilter. Thank you."
Keri Strahler The Yule Tree ~ A Holiday ..."
"Planning for Yule 2021. This helps"
Wisdom Seeker Wheel of the Year: Yule
"Thank you to share about your thoughts.It just happened today many of the old covenant ..."
Herrnhut The three aspects of Samhain – ..."
"I'm glad I'm not the only one who experiences a summer slump. I used to ..."
Hannah The Autumn Awakening ~ Returning to ..."
Browse Our Archives
Related posts from Nature's Sacred Journey