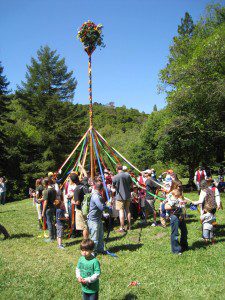 Beltane in a Time of Injustice

Beltane is one of the most favorite pagan holidays. It marks spring in full bloom and the sacredness of the tree. In many cultural traditions around the globe, it represents the tree of life which connects heaven and earth.

During this past week, I was watching on television the protests in Baltimore, the indictments of police officers in the death of an unarmed African American. and peaceful protests during the weekend that were multicultural.

After violence erupted earlier in the week, the community responded with non-violent vigils. By the weekend, local people were joined by others who had traveled to this City to be a part of an emerging call for justice for all in our society. Commentators told us about the inequities that extend far beyond these incidents of unarmed deaths in police custody.

What does this have to do with Beltane? The column Beltane Magic: Birthing a New Reality by Crystal Blanton, a woman of color pagan, is well worth the read. She tells us how her pagan beliefs relate to the pain she feels as a woman of color as the community she identifies with is going through injustices that are widespread and long lived. Her column is posted at:

As UU pagans we have a unique contribution to make to this effort. Unitarian Universalists have a long and deep commitment to being part of the effort to right the wrongs of racial injustice that have permeated American society and continue to plague us. This spring there was a celebration of the fiftieth anniversary of the Selma to Montgomery March lead by Dr. Martin Luther King, Jr. Two Unitarian Universalists, James Reeb and Viola Liuzzo, who went to Selma to participate, were murdered then and honored this year. In 1965, I was preparing to graduate from an all-white high school in Northern Ohio. The courage shown by so many in Selma that year called me to an engaged life. My passion for multiculturalism, informed by liberal religious values, has guided my involvements. The proceedings of the UU Selma conference, which are informative and inspiring, can be viewed on the website of the Living Legacy Project. http://www.uulivinglegacy.org/

As Unitarian Universalist pagans we are embedded in a dynamic community of people who profess their desire to seeking a coherent spiritual and ethical outlook that responds to current circumstances justly.

But is celebration a proper part of our efforts for social justice? I believe it is. For me, honoring the bounties of the Earth in the face of social imbalances is a way to keep the energy focused on a positive outcome while never loosing site of the suffering and discrimination. We are urged to realize that we all are equal, all global citizens and that we should work together with others who are committed to being agents of change. 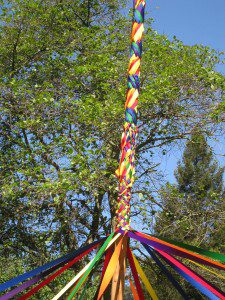 Beltane as a Social Justice Statement

I frequently attend a Maypole dance. This holiday has become a popular one in many communities, with children coached to enact the dance that creates a weaving of multicolored ribbons around a poll. I was surprised to learn a few years ago that this holiday was outlawed in past centuries because it was seen as a challenge to social stratification.

Barbara Ehrenreich in her book Dancing in the Streets: A History of Collective Joy does a masterful job of tracing the history of joyous celebrations and their repression by the authoritarian Christian churches because they were seen as undermining their puritan view of an orderly society. Those who benefited from low waged work thought such celebrations encouraged rebellion; rather, they professed hard work, little pay and solemn prayer as the most sacred expressions. In the seventeen century a wave of repression of all festive holidays extended from Scotland south to parts of Italy and eastward to Russia and Ukraine. Traveling troupes of actor and musicians began to find themselves unwelcomed in towns. The maypoles that had marked festivals were often cut down.

So what does this history have to do with the situation today? A lot in my view. By continuing to dance the Maypole we are making a social justice statement for community, equality and joyous celebration of all for one and one for all as we intertwine our ribbons. Perhaps this year we are called to confront injustice and plant the seeds of an awakening that can bring us empathy for those who are subjected to blatant mistreatment. Let’s allow this symbolic gesture to open our hearts to more awareness, giving us the power and desire to act for racial justice whenever the opportunity calls us to do so.

About Elizabeth Fisher
Elizabeth Fisher is a professional writer, the author of the UU Women’s Federation course Rise Up and Call Her Name: A Woman-honoring Journey into Global Earth-based Spiritualities and a variety of other publications. She received the CUUPS Margaret Fuller–Henry David Thoreau award for furthering understanding of earth-centered philosophy, is included on a list of the Thirteen Most Influential People in Women’s Spirituality, and is on the advisory board of the Goddess Museum of Art and Culture in Orange County, Ca. Over the years since 1982, when Liz became a Unitarian Universalist, she has been a leader in the UU Women and Religion Movement, a CUUPS regional ritual group, and a variety of faith-based social justice movements. You can read more about the author here.
Previous Post 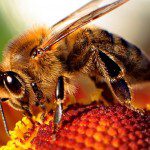 April 30, 2015
The Gift of the Bees: An Inclusive Beltaine
Next Post