Patheos Explore the world's faith through different perspectives on religion and spirituality! Patheos has the views of the prevalent religions and spiritualities of the world.
Maybe the word that best describes my reaction upon reading the recent statement from Pope Francis entitled  “ON CARE FOR OUR COMMON HOME” is stunned. The statement is laced with the language of progressive social, environmental and economic justice.  Reporting on such a profound document and its’ implications upon future inter religious dialogue can at best only scratch the surface of this game changing statement.  Let my urge everyone to set aside time to read the entire document:

Upon my first reading I was struck with language that seemed to denounce the long-standing doctrine of the church that has fuled extremist environmental dominionism over our planet. It was this passage that got me to thinking about the profound change in church thinking.

“If we approach nature and the environment without this openness to awe and wonder, if we no longer speak the language of fraternity and beauty in our relationship with the world, our attitude will be that of masters, consumers, ruthless exploiters, unable to set limits on their immediate needs.”

“Patriarch Bartholomew has spoken in particular of the need for each of us to repent of the ways we have harmed the planet, for “inasmuch as we all generate small ecological damage”, we are called to acknowledge “our contribution, smaller or greater, to the disfigurement and destruction of creation”.[14] He has repeatedly stated this firmly and persuasively, challenging us to acknowledge our sins against creation”

This departure from conservative religious dogma is enough all by itself to convince me of the importance of the document; but there was more to come.  Pope Francis goes on to acknowledge how acceleration of change affects us all and coins a term to describe his opinion.  In support of his point he goes on to implicitly recognize “biological evolution”, my eyes became very large while reading is:

“The continued acceleration of changes affecting humanity and the planet is coupled today with a more intensified pace of life and work which might be called “rapidification”. Although change is part of the working of complex systems, the speed with which human activity has developed contrasts with the naturally slow pace of biological evolution.

The social dimensions of global change include the effects of technological innovations on employment, social exclusion, an inequitable distribution and consumption of energy and other services, social breakdown, increased violence and a rise in new forms of social aggression, drug trafficking, growing drug use by young people, and the loss of identity. These are signs that the growth of the past two centuries has not always led to an integral development and an improvement in the quality of life. Some of these signs are also symptomatic of real social decline, the silent rupture of the bonds of integration and social cohesion.

“It needs to be said that, generally speaking, there is little in the way of clear awareness of problems which especially affect the excluded. Yet they are the majority of the planet’s population, billions of people. These days, they are mentioned in international political and economic discussions, but one often has the impression that their problems are brought up as an afterthought,

To blame population growth instead of extreme and selective consumerism on the part of some is one way of refusing to face the issues.

Yet it would also be mistaken to view other living beings as mere objects subjected to arbitrary human domination. When nature is viewed solely as a source of profit and gain, this has serious consequences for society. This vision of “might is right” has engendered immense inequality, injustice and acts of violence against the majority of humanity, since resources end up in the hands of the first comer or the most powerful: the winner takes all”

“Just as I begin to think that I have grasped the totality of this statement Pope Francis goes on to embrace cultural sensitivity and denounce the cultural and physical destruction of indigenous cultures. My sense of what the Roman church stands for has been decimated. I am stunned!

A sense of deep communion with the rest of nature cannot be real if our hearts lack tenderness, compassion and concern for our fellow human beings. It is clearly inconsistent to combat trafficking in endangered species while remaining completely indifferent to human trafficking, unconcerned about the poor.

Ecology, then, also involves protecting the cultural treasures of humanity in the broadest sense. More specifically, it calls for greater attention to local cultures when studying environmental problems, favouring a dialogue between scientific-technical language and the language of the people. Culture is more than what we have inherited from the past; it is also, and above all, a living, dynamic and participatory present reality, which cannot be excluded as we rethink the relationship between human beings and the environment.

In this sense, it is essential to show special care for indigenous communities and their cultural traditions. They are not merely one minority among others, but should be the principal dialogue partners, especially when large projects affecting their land are proposed. For them, land is not a commodity but rather a gift from God and from their ancestors who rest there, a sacred space with which they need to interact if they are to maintain their identity and values. When they remain on their land, they themselves care for it best. Nevertheless, in various parts of the world, pressure is being put on them to abandon their homelands to make room for agricultural or mining projects which are undertaken without regard for the degradation of nature and culture.”

In an acknowledgement on the responsibility that western consumer societies have for the damage being done to our collective home he makes a good point about our cultural attachment to consumerism.

In those countries which should be making the greatest changes in consumer habits, young people have a new ecological sensitivity and a generous spirit, and some of them are making admirable efforts to protect the environment. At the same time, they have grown up in a milieu of extreme consumerism and affluence which makes it difficult to develop other habits. We are faced with an educational challenge.

A number of pages are devoted to making his case to Catholics via Christian doctrine and biblical passages.  Just as I begin to sense that I have grasped the totality of the statement he adds this description of Mary that is as eloquent an acknowledgment of the divine feminine as I have ever encountered coming from any Christian, much less a Pontiff.

Mary, the Mother who cared for Jesus, now cares with maternal affection and pain for this wounded world. Just as her pierced heart mourned the death of Jesus, so now she grieves for the sufferings of the crucified poor and for the creatures of this world laid waste by human power. Completely transfigured, she now lives with Jesus, and all creatures sing of her fairness. She is the Woman, “clothed in the sun, with the moon under her feet, and on her head a crown of twelve stars

Am I going to run out and become Catholic? Not a chance. There remain wide areas of disagreement that prevent me from fully endorsing the beliefs of the Roman Church. That being said, this is a profound document.  When an ancient institution culpable in the worldwide spread of Patriarchy, and environmental and social genocide reverses course it is a victory for rational thought among our planetary community.  The intersections of mutual interest with the Vatican have just grown ten fold. I look forward to working with the church in seeking environmental, social and economic justice.  Just the mere fact that the church now sees these things as connected may establish this as the most important religious publication of our lifetimes.

There is so much more to this document, these are the things that impacted me upon a first reading.  I would love to hear how it impacted others in the community. Please let me know in the comments section. 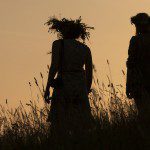