Forgetting to be Grateful?

Here in the hospital tonight I’m hearing a lot about Thanksgiving:

What I’m not hearing, this year, is much about what people are thankful for, apart from the specifics of their holiday plans. I hear lots about the horrible economy, about how hard it is to find a job (if you don’t have one) or get a promotion (if you do). I hear about irritating spouses, disobedient teenagers, terrifying diagnoses.

Even the occasional miraculous recovery seems to come equipped with disclaimers about how it didn’t arrive fast enough or didn’t bring the patient all the way back to where they used to be ‘before this illness’ (or injury or surgery). As in any hospital, there’s a lot of loss – people getting a diagnosis that will permanently change the way they live, people having to say goodbye to loved ones after major injury causes death, or major illness shortens life.

The theme, a lot of times, seems to be greed. Or at least, entitlement. Strikingly, the people most likely to sound disgruntled appear (from the outside, anyway) to be those who already have the most: the great clothes, the fancy cars, the expensive vacation plans, the White Privilege, the Male Privilege, the Economic Status Privilege, the Education Privilege. (Do I have to unpack any of those terms for you? One good place to start would be Unpacking the Invisible Knapsack. Full disclosure: I have most of these myself; I’m not ‘critiquing the other’ here.

Some of us hear about climate change or income inequality and think the right thing for us to do about that is to get rid of one of our extra cars – because, you know, a household probably doesn’t need more vehicles than it has drivers.

Even those of us who are practitioners in nature-based religions aren’t doing this any better. Not long ago I drove six hours each way to attend a two-hour ritual. Though several of us from greater Philadelphia were going to the same place, we didn’t even try to work out carpooling – because it would have been inconvenient. As we worship All That Is Divine as The Natural World, we burned up a lot of fossil fuel to serve our own convenience.

Last summer about a hundred of us gathered for a week-long retreat. We chose a rustic site in order to reduce our use of natural resources. But then most of us arrived in individual cars, or at best in pairs, from all over the East coast. Some of us wanted to share information with others, and people brought printouts by the dozens. I wonder how much of that paper could have been saved? Or at least, recycled? Many of us brought hi-tech camping gear made of exotic materials – lightweight, waterproof, insulated or heat-reflective – because we didn’t want to be ‘uncomfortable’ while enjoying ‘nature.’

As the dominant culture gets bigger, with ads on Facebook and everyone in the grocery-store line looking separately at their smartphones, it seems that more of our actions are scripted.

“Happy Thanksgiving!” is a fine greeting, but what does it mean when people who are already exhausted from working 16-hour shifts on Wednesday are asking each other “what are you doing for Thanksgiving” – as a social pleasantry – and sharing complaints about how much work they have to do to produce the extravaganza their in-laws expect? When did “what are your plans for the holiday?” become “are you ready for the extra work?” or even “don’t you have any family plans?” (with a side order of ‘what’s wrong with you that you’re not doing this holiday right?’).

Some among us hold out for holidays to be heartwarming family occasions – peaceful, cooperative, celebratory, with plenty of traditions but none of them slavishly produced. Others seem to be engaged in a competition: who can host the greatest number of guests? Cook the biggest turkey? Create the most lavish décor?

I’m out of touch with the TV narrative (thank all the Powers for that) but I hear from others that the Christmas Shopping commercials started this year right after Halloween, skipping Thanksgiving altogether. There’s plenty of talk this year about stores that are opening for “Black Friday” hours early, depriving both employees and customers of family time on the Thanksgiving holiday itself.

I remember – it must be 50 years ago now – when Thanksgiving was a four-and-a-half-day holiday, with school and work getting out at noon on Wednesday, family arriving from a few hours away by car to share a meal cooked by several, games of catch and demonstrations of prowess among the young people and uncles napping in the living room while the aunts did the dishes. Apart from the orgy of overeating and the rampant sexism of those times, it seemed that the emphasis was on family, being glad of each other’s company, being thankful for the good things of the preceding year. Often our family attended religious services together, which were also focused on family, joy, and gratitude.

Today, though, it seems that Thanksgiving has become a four-day weekend of obligatory excess. People get out of school or work at the usual time, and have to rush like crazy to get the car packed to drive late into the night or get up early to be on the road in time for a dinner gathering. And before the dishes are done, everyone is on to the next thing – shopping for bargains for Christmas presents even though nobody wants anything they haven’t picked out for themselves.

Do I want to try to talk about the phenomenon of buying gifts for someone you don’t know well or don’t much like, without having a clear notion of their preferences? What does it mean that people are getting up from a Thanksgiving table to run out to shop for ‘that hard-to-shop-for uncle that you only see at the holidays,’ anyway? What does it mean when the well-meaning uncle gracefully accepts that gift, only to take it to the thrift store donation site on Monday?

When I sat down to write this, I thought I would write a tightly-reasoned essay about modern life, its joys as well as its excesses, but as you see I’ve instead written a sketch of several different rants. Aren’t you glad I didn’t try to write each one out long?

I hope each of you has enjoyed your Thanksgiving Day, or extra day off, or working non-holiday, no matter how you spent that time. I hope each of us can take a moment to feel grateful and glad for the joys we have experienced and the challenges we have met, and for whatever love we can find. 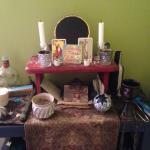 November 30, 2015 The Role of Divination in Discernment
Recent Comments
4 Comments | Leave a Comment
"I love this! I've been in such a funk lately, feeling off-kilter. Thank you."
Keri Strahler The Yule Tree ~ A Holiday ..."
"Planning for Yule 2021. This helps"
Wisdom Seeker Wheel of the Year: Yule
"Thank you to share about your thoughts.It just happened today many of the old covenant ..."
Herrnhut The three aspects of Samhain – ..."
"I'm glad I'm not the only one who experiences a summer slump. I used to ..."
Hannah The Autumn Awakening ~ Returning to ..."
Browse Our Archives
get the latest updates from
Nature's Sacred Journey
and the Patheos
Pagan
Channel
POPULAR AT PATHEOS Pagan
1