On a Starry Night

“He was singing a melody he did not know, and yet the notes poured from his throat with all the assurance of long familiarity. They moved through the time-spinning reaches of a far galaxy, and he realized that the galaxy itself was part of a mighty orchestra, and each star and planet within the galaxy added its own instrument to the music of the spheres. As long as the ancient harmonies were sung, the universe would not entirely lose its joy.” A Swiftly Tilting Planet, Madeleine L’Engle, p.77

This past Sunday I attended a concert performed by Portara Ensemble, one of our very talented music groups here in Nashville. I knew it was going to be good, but I was unprepared for how deeply and profoundly the performance would affect me. The theme of the evening was “On a Starry Night,” and it featured songs written about the stars from a stunning variety of sources. More than that, however, was the music itself, the live performance of the voices and instruments.

I grew up reading the work of Madeleine L’Engle, and have carried with me her descriptions of the stars of the universe as living beings, interconnected, who sing songs and speak to humans willing to tune themselves to the earth around them and their fundamental link as part of the larger cosmos. I have spent many an hour contemplating the songs of the stars: what they sound like, how hearing them would make me feel, and what else must I do in my life, with my life, by honouring the earth and the interdependent web, to be able to hear the stars singing back to me.

On Sunday night, I heard the songs of the stars. Not only were the lyrics a multitude of stories about the stars and how they reach us, but the performance itself, the vibrations made by voice and piano and flute seeped into me, saturating my being until I could hold no more and it flowed out as tears of joy. In A Swiftly Tilting Planet, when Meg hears her brother join the cosmic song, she says, “the music–it was more–more real than any music I’ve ever heard. Will we hear it again?” I did not need to be singing myself to feel, to know, in that moment, that I was also a part of the cosmic, galactic song sung through the ages.

It was one of the few times in my life that I have experienced simultaneous immanence and transcendence. I had the sense of the full power within me, the life force of my individual essence and its physical, emotional, and mental forms, and the ability to bend the arc of the universe towards justice. At the same time I was dissolved into the interdependent web, inextricable from the people around me, the ground below me, the sky above me. I was what Nicholas of Cusa called a “coincidence of opposites”, the finite and the infinite folding and enfolding into one another to make something larger than either thing standing alone.

Of course, not everyone reads Madeleine L’Engle. Not everyone reacts to music in the same way. I share this with you only to express my joy at having experienced such a moment of deep connection with nature in a culture that is constantly trying to teach us to disassociate from our bodies and the world around us. What brings you that sense of connection? What sustains you on Nature’s Path? How can you sustain our efforts as Unitarian Universalists to bend the arc towards justice, not just for ourselves, but for the cosmos? 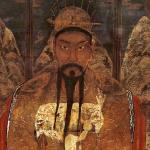 December 11, 2015 Light a Candle To Begin
Recent Comments
1 Comment | Leave a Comment
"Sorry, posted accidentally before finishing."
Rylin Mariel Spring Magick: Prayers on the Wing
"You might want to listen to "Birdnote", which is available on public radio stations. They ..."
Gordon Cooper Spring Magick: Prayers on the Wing
"the Most Sacred Space in all the worlds is the pause between fits of Laughter..."
Jay Mann The Spirituality of Play: Divine Silliness ..."
"The Big Box of Crayola Crayons is part of a balanced Druid ritual practice. Use ..."
Gordon Cooper The Spirituality of Play: Divine Silliness ..."
Browse Our Archives
get the latest from
Nature's Sacred Journey
Sign up for our newsletter
POPULAR AT PATHEOS Pagan
1

The Magick of Melissa...
A rainy day brought about my kitchen being enchantingly scented with lemon...
view all Pagan blogs
What Are Your Thoughts?leave a comment
Copyright 2008-2021, Patheos. All rights reserved.