She Will Not Be Tamed

A cosmic force stirs her loins,

magma roils within her womb;
she breathes in sulfurous gasps,
convulses, erupts,
lava steams into the sea.

Wind chokes on her ash and when
her molten body rolls into the water
boulders blast skyward
like rebellious marchers demanding chaos
spitting into the eye of the status quo.

Her skin trembles and newborn
shelves of land crack;
undermined by unseen forces,
they crash into the sea.

She is nothing if not new.

She is nothing if not old.

Her dance with the sea
explodes with an energy
kindred only to her sisters, the stars.

Honored to be so close

A friend who lives uphill and upwind from Kilauea says he feels honored to be so close to her. He and his wife, former colleagues of mine when we worked at a South Carolina newspaper, retired to the Big Island of Hawaii a few years ago.

When I wrote the poem, “Pele’s Creation Dance,” for my book, Gaia’s Cry, Kilauea was quiet. Since her eruption, as of this writing about one month ago, her lava covers 7.7 square miles and has destroyed more than 300 structures, according to news reports and the U.S. Geological Survey. Green Lake, the largest lake on the island, evaporated in five hours when lava hit. At Kapoho Bay, Kilauea is reshaping the coastline.

When lava powered into the Pacific, my colleague Debbie informed her Facebook friends of her “word of the day—laze.” Laze forms when lava hits the ocean and creates a steam cloud, a toxic combination of hydrochloric acid and fine glass particles. As if the ash weren’t enough.

None of this is a surprise to native Hawaiians who respect Pele, goddess of volcanoes, for her power to destroy and to create new land.

As I write, ABC News reports Kilauea is spewing ash a mile high as an explosion kicked off an earthquake, and lava flowing from fissures traps residents behind the evacuation routes they were counting on. It’s flowing at the rate of six football fields an hour, ABC reports.

The Hawaiian Islands themselves were formed by volcanic action over millions of years. The creation of new land in a cauldron of destruction.

Polynesian traditions don’t consider nature something separate to dominate. Instead, they take an organic, integral view in which all is part of the whole. The goal is to live in harmony and respect. This, according to the Unitarian Universalist curriculum, Rise Up and Call Her Namewritten and edited by Elizabeth Fisher.

This wisdom seems to be the essence of environmental movements. To stand in awe and reverence of elemental forces. To understand we are integral with Earth, our home. She will not be tamed.

Nan Lundeen is the author of the book of poems, Gaia’s Cry. Visit her at www.nanlundeen.com.

About Nan Lundeen
Nan Lundeen is the author of the book of poems, Gaia’s Cry. Visit her at www.nanlundeen.com. You can read more about the author here.
Previous Post 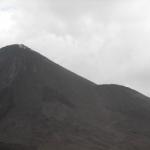 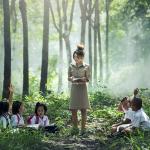 The Wiccan Who Was Mean to...
Fivefold Law
Related posts from Nature's Sacred Journey