Today I’m sharing a Bible study at Noonday at the Baptist Student Union of Mississippi State University (#HailState). Since I went to already went to the trouble of collecting my thoughts for them, I thought I’d share them with you as well. 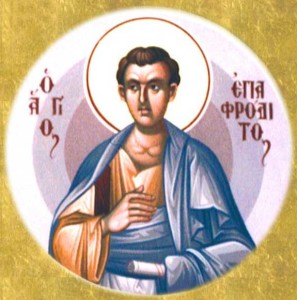 My assignment was to do a character study of Epaphroditus from the New Testament. Never heard of Epaphroditus? Don’t worry, no one has! He gets fifteen seconds of fame in the book of Philippians. And yet from those few short verses, we can learn some timeless truths. Let me set it up this way: how many of you have an older sibling? How many of you grew up in your older sibling’s shadow? How many of you are secretly convinced that your parents had a favorite child growing up, and it wasn’t you?  That’s a little tougher because your parents will deny it, but you know . . . you know.

The reason I bring all this up is because I sense a little of this relationship when I read the passage in Philippians 2, the only time in Scripture where Epaphroditus is mentioned.

19 I hope in the Lord Jesus to send Timothy to you soon, that I also may be cheered when I receive news about you.

Paul wants to send Timothy to the church in Philippi as his ambassador/surrogate to check on them, and Timothy will return and give Paul an update on the church.

20 I have no one else like him, who will show genuine concern for your welfare. 21 For everyone looks out for their own interests, not those of Jesus Christ.

22 But you know that Timothy has proved himself, because as a son with his father he has served with me in the work of the gospel. 23 I hope, therefore, to send him as soon as I see how things go with me. 24 And I am confident in the Lord that I myself will come soon.

As a son with his father. That’s where Paul makes the father/son reference. Paul loves this guy! So, to sum up: Timothy is awesome, he’s sold out to Jesus, he’s like Paul’s son. Now, we’re about to get to Epaphroditus. I’m going to read it straight through, and I want you to actively listen and see if you can tell any difference about how Paul writes about Timothy and how he writes about Epaphroditus.

25 But I think it is necessary to send back to you Epaphroditus, my brother, co-worker and fellow soldier, who is also your messenger, whom you sent to take care of my needs. 26 For he longs for all of you and is distressed because you heard he was ill. 27 Indeed he was ill, and almost died. But God had mercy on him, and not on him only but also on me, to spare me sorrow upon sorrow. 28 Therefore I am all the more eager to send him, so that when you see him again you may be glad and I may have less anxiety. 29 So then, welcome him in the Lord with great joy, and honor people like him, 30 because he almost died for the work of Christ. He risked his life to make up for the help you yourselves could not give me. Philippians 2:19-30

I mean, he compliments Epaphroditus. He’s a brother (not like a son to him), co-worker, fellow soldier. Compliments, but not the warmth. His task was to take an offering from the church in Philippi in modern day Turkey to where Paul was imprisoned in Rome to help him with his expenses. So the picture is of Epaphroditus being sent to help and minister to Paul, and it was just short of an epic fail. Yes, he got the money to Paul that he needed, but Epaphroditus got deathly ill while in Rome. He almost died. So Epaphroditus was sent to take care of Paul because Paul was imprisoned under house arrest, and in the end Epaphroditus became a burden to Paul because he almost died and Paul had to bring him back to health. Now obviously it wasn’t Epaphroditus’ fault. Health conditions were bad back then. But it’s not like Epaphroditus would ever look back at that trip to Rome, to minister to the great Paul and say to himself “nailed it.” He almost died. And you almost get the sense that Paul is relieved to be sending Epaphroditus back to Phillipi, that Epaphroditus was a burden to Paul. He says, “Timothy, he needs to stay with me. Epaphroditus, you can go back.” Who seems to be more important to Paul?

Now, Paul is very gracious about the whole thing by saying at the end, “Welcome him in the Lord and honor men like him,” but if you had to pick the favorite son out of these two, we’d all say it was Timothy. That’s why there are millions of people named Timothy walking around this earth (currently ranked #125 in US births. Highest ranking was #11 in 1967) and hardly anyone named Epaphroditus. If we had choose between the two, I think all of us would rather say, “I’d want to be Timothy.” So, just to keep things interesting (and because there are already a million sermons on Timothy), I want to give you 4 lessons from the life of Epaphroditus.

1. Serving doesn’t exclude you from suffering.

Here Epaphroditus is doing something great, something meaningful, something in service of God. And he almost dies. God is sovereign. He could have kept Epaphroditus from becoming ill, but in his sovereign wisdom and choice, he chose not to. There is this prevailing myth out there that if we just love Jesus enough, he’ll take all of our problems away and it will be nothing but rainbows and unicorns. So when life gets tough, we figure we’re doing something wrong or God doesn’t love us that much. Serving doesn’t exclude you from suffering.

2. Failure is a normal part of life, including serving God.

Epaphroditus’ mission was by many accounts a failure. That doesn’t mean that Epaphroditus was a failure. You will fail. If you allow failure or the fear of failure to cripple you, it will become a self-fulfilling prophecy and you’ll actually become a failure. I pastor a healthy, vibrant church. Now I can whitewash my past and leave out the part where several years ago I was fired from my church. I just wasn’t working out for them. Failure is a part of life. Failure doesn’t make you a failure. Failing to learn from your failures makes you a failure. Failure will be one of the most incredible teaching tools you’ll ever have in life. No one wants to fail. No one plans to fail. But when you fail, learn from it.

3. Value in the Kingdom will always spring from community.

Why did Epaphroditus make Scripture? Because he was so vital to the community in Philippi. They were genuinely concerned about him. He had spent years faithfully serving, leading, helping, teaching. The church at Philippi was his family. Don’t drop from community when you’re in college. Get involved in a local body of believers. Plug in. Teach middle schoolers. Sit next to senior adults. Value has always sprung from community. It you want to make a difference, you have to be plugged into community.

4. The majority (or all) of your life will be out of the limelight.

Are you okay with that? We all want to be Timothy. In reality, we’re more like Epaphroditus. It’s tough for us. You’re the ‘selfie’ generation. Our fascination with ourselves. You want to change the world, but you want the world to watch you do it. What if you serve God with all your heart, but don’t get any earthly recognition for it? Are you okay with that? You may never be famous. You may never be up in front of people as a pastor. If you are, maybe you’ll always serve in smaller churches. Maybe your life will be something out of the limelight, like a nurse, an engineer, an accountant. Not exactly the flashy roles like missionary or pastor. But you still have a role to play. Are you okay if your role is out of the limelight?

If we ever want God to do anything through us, there has to be a death to self. It’s not easy, it’s painful, but it’s the price tag for being used to do something meaningful in your life.