Am I the Only One Uneasy About the Evangelical Embrace of Trump?

I could accurately be labeled a stereotypical conservative Republican. I don’t believe I’ve ever pulled the lever for a Democrat in an election. Come November, if the choice is between Clinton and Trump, I’ll vote for Trump and pray for the best. But that doesn’t mean I’ll be happy about either of the available candidates left.

Every cycle politicians line up constituencies to propel them into office. And since the advent of the Moral Majority in 1980, evangelicals have been reliably Republican. Some cycles we would have to stretch a little farther to look past the misdeeds of our preferred candidate, but this election cycle is something else altogether.

When it comes to integrity, transparency, morality and hubris, there doesn’t seem to be a lot of daylight between the two remaining candidates. But don’t mention that to Robert Jeffress, Jack Graham, Richard Land, Ronnie Floyd and many other prominent leaders in the evangelical community. When it comes to my denomination (Southern Baptists), three of our largest churches have pastors on his advisory board. Everyone is quick to say that their participation is not an official endorsement, but in today’s media it is seen as exactly that.

Jerry Falwell Jr. was recently criticized for posing with Donald Trump in front of a Playboy cover, not quite the optics that affirm the sanctity of our moral purity. At a recent summit with evangelical leaders, Trump (not surprisingly) told the crowd exactly what they wanted to hear, leading more evangelical leaders to walk away fully embracing the presumptive standard bearer for the Republican party. Is it because they see something that the public doesn’t, or is it the same intoxication that comes with proximity to power that causes countless people to compromise their standards? I see zero chance of this advisory board having an impact on Trump’s meandering ethics. I see it simply as a ploy to placate a voting bloc.

As I stated at the beginning, I will definitely exercise my constitutional right to vote come November and it will probably be for Trump, but will I be the only evangelical uneasy about the whole thing? Am I seeing something that no one else is? Trump has a horrible track record with the truth, his public statements could easily put world markets into a tailspin, he’s turning back the clock to an isolationist America circa the 1930s, his outright racist remarks towards a judge presiding over a case against him is reprehensible, his past and current behavior could easily translate into impeachable offenses once in office, and his ability to play off of fear is reminiscent of dictators in world history. I can only trust him to do what’s best for him. He doesn’t represent the best that our country has to offer or someone that we would want to represent us on the world stage. But sadly enough (from my perspective), he’s the best candidate left.

I’ll most likely vote for him, but don’t expect me to embrace him. I had hoped that as evangelicals we had learned our lesson from the Moral Majority years and had begun to divorce our scriptural duty to fulfill the Great Commission from Republican politics. But I guess I was wrong.

QUESTION: Am I off base here? What do evangelicals see in Trump that I don’t that has caused such an embrace?

June 23, 2016
Can You Be a Southern Baptist and Believe in the Miraculous Gifts?
Next Post 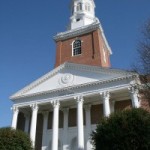 June 27, 2016 5 More Out-of-the-Box Things Southern Baptists Can Do to Jumpstart Growth
Recent Comments
0 | Leave a Comment
"We need Nasori scene again next chaps 😁😁😍😍dt.SWORDGIPHY.COM/Bo5235OA"
Chaosant This is the Moment for the ..."
"No ml oknow I'm fine with that instead let's just have a haremVa.9226C.US/q5235ZR"
KrazeKode 5 Important Tweaks to Make to ..."
"The first thought of the blood on the sofa was someone on their period but ..."
Gek 5 Good Things Coming Out of ..."
"already go down too deepSv.92187.ME/gA5235r"
Fuiren 6 Practical Ways to Share Your ..."
Browse Our Archives
Related posts from New Wineskins