The Missing Piece of Evangelism in Most of Our Churches

The Missing Piece of Evangelism in Most of Our Churches March 21, 2016 Josh Daffern 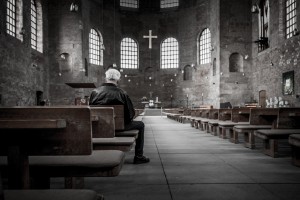 I’ve never liked going door-to-door witnessing. Growing up, I was taught that proper evangelism was sitting in classrooms, memorizing points and techniques, making sure you had all the proper tabs in your Bible marked, working on your counter-arguments when they would inevitably push back, and then start knocking on doors, interrupting people during dinner and seeing who you could argue into the Kingdom of God. Sounds like fun, right?

Reading through the book of Acts, you see the apostles and disciples sharing the good news of Jesus constantly. They shared their belief in Jesus again and again, but there’s a missing piece, something they did in the first century that rarely happens today, something that I believe explains why so much of our modern evangelism is ineffectual. But don’t take my word for it. Look in the book of Acts and see if you can spot it. What’s missing from most of our evangelism today is a demonstration of the Spirit’s power. The common theme woven throughout the times the disciples shared the gospel of Jesus is the fact that it was either in response to or in confirmation of the Spirit’s power. Look for yourself:

In Acts 2, the day of Pentecost, Peter preached to the crowds, saying among many other things, “God has raised this Jesus to life, and we are all witnesses of it” (Acts 2:32). Why was there a crowd there in the first place to preach to? Because of the Spirit coming and resting on the disciples, a demonstration of His power.  Now there were staying in Jerusalem God-fearing Jews from every nation under heaven. When they heard this sound, a crowd came together in bewilderment, because each one heard their own language being spoken (Acts 2:5-6).

Two chapters later when Peter and John are called to testify before the Sanhedrin, they preach these memorable lines: “Salvation is found in no one else, for there is no other name under heaven given to mankind by which we must be saved. . . . As for us, we cannot help speaking about what we have seen and heard” (Acts 4:12, 20). Why did Peter and John even have the opportunity to share the gospel with the leaders that killed Jesus? Because in Acts 3 a cripple was healed by Peter and John. Taking him by the right hand, he helped him up, and instantly the man’s feet and ankles became strong (Acts 3:7).

Look again in the next chapter in Acts 5 when the apostles once again preach to the religious leaders of Judaism: “The God of our ancestors raised Jesus from the dead—whom you killed by hanging him on a cross. God exalted him to his own right hand as Prince and Savior that he might bring Israel to repentance and forgive their sins. 32 We are witnesses of these things, and so is the Holy Spirit, whom God has given to those who obey him” (Acts 5:30-32). What preceded this sermon? The apostles were thrown in jail, but God sent an angel to open the jail and release the disciples. The angel then instructed the disciples to go back to the temple and continue preaching (Acts 5:18-20). That would qualify as a demonstration of the Spirit’s power.

In Acts 7 an entire chapter is dedicated to the sermon of Stephen, the first Christian martyr, given before his execution. How is Stephen introduced to us in Scripture? Now Stephen, a man full of God’s grace and power, performed great wonders and signs among the people (Acts 6:8). The pattern continues in the second half of the book of Acts when you move to the missionary journeys of Paul. Consider how the Bible describes Paul’s effectiveness in sharing the gospel. So Paul and Barnabas spent considerable time there, speaking boldly for the Lord, who confirmed the message of his grace by enabling them to perform signs and wonders (Acts 14:3). Look at how the Bible describes Paul’s time in Ephesus: God did extraordinary miracles through Paul, so that even handkerchiefs and aprons that had touched him were taken to the sick, and their illnesses were cured and the evil spirits left them (Acts 19:11-12).

A demonstration of the Spirit’s power is the common theme that runs through every presentation of the gospel in the book of Acts. This is where the letters of Paul become so important, because it gives us insight into the mind and approach of the man (other than Jesus) most responsible for the spread of Christianity. Here’s how Paul approached evangelism, in his own words: “My message and my preaching were not with wise and persuasive words, but with a demonstration of the Spirit’s power, so that your faith might not rest on human wisdom, but on God’s power” (1 Corinthians 2:4-5)

If even the apostle Paul did not rely on wisdom or persuasive words (and he had more spiritual wisdom to rely on than most people alive today), then why was I raised in a church environment that taught me that the best way to evangelize was to memorize a canned approach (wise and persuasive words) and try to argue people into the Kingdom of God? Is this perhaps why in so many churches evangelism is awkward, avoided by most church members, and ultimately so ineffectual? Is it perhaps we’ve long ago discarded the power behind any successful gospel presentation, a demonstration of the Spirit’s power?