Biblical Wisdom from a Secular Psychologist 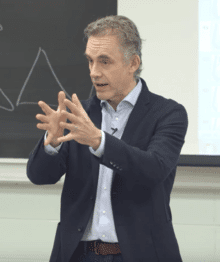 What would Solomon say to anxious young today?  We have our answer in a remarkable book by Jordan Peterson, a Canadian academic (University of Toronto) psychologist.

His advice is helpful to Christians who cower before politically-correct attacks on orthodoxy.

Here are some tips from Peterson’s new book, Twelve Rules for Life: An Antidote for Chaos.

I speak with young people beginning their careers I often tell them that in spite of the apparent formidableness of the adults around them—their mastery of office systems, their professional accomplishments, their sheer ability to last—almost everyone begins every day just trying to keep up their morale. Everyone’s trying to be hopeful about themselves and the world. People are more confused, even defeated by life, than they let on; many people—most—have times when they feel they’ve lost the plot, the thread. So go forward with appropriate compassion.

This flashed through my mind when I saw the interview this week between British television journalist Cathy Newman and clinical psychologist and social philosopher Jordan Peterson. It burned through the internet, in part because she was remarkably hostile and badgering: “What gives you the right to say that?” “You’re making vast generalizations.” He seemed mildly taken aback, then rallied and wouldn’t be pushed around. It was also interesting because she, the fiery, flame-haired aggressor, was so boring—her thinking reflected all the predictable, force-fed assumptions—while he, saying nothing revolutionary or even particularly fiery, was so interesting. When it was over, you wanted to hear more from him and less from her.

I wondered when I first read the headlines: What could a grown-up, seemingly stable professor (former associate professor of psychology at Harvard, full professor for 20 years at the University of Toronto) stand for that would make a journalist want to annihilate him on live TV—or, failing that, to diminish him or make him into a figure of fun?

He must have defied some orthodoxy. He must think the wrong things. He must be a heretic. Heretics must be burned.

I had not known of his work. The interview was to promote his second book, “12 Rules for Life: An Antidote to Chaos.” Mr. Peterson is called “controversial” because he has been critical, as an academic, of various forms of the rising authoritarianism of the moment—from identity politics to cultural appropriation to white privilege and postmodern feminism. He has refused to address or refer to transgendered people by the pronouns “zhe” and “zher.” He has opposed governmental edicts in his native Canada that aim, perhaps honestly, at inclusion, but in practice limit views, thoughts and speech.

This is unusual in a professor but not yet illegal, so I bought his book to encourage him.

In it he offers advice, much but not all of it based on decades of seeing patients as a psychologist, on the big eternal question: How to Live.

He is of the tough school: Know life’s limits, see and analyze your own, build on what you’ve got and can create.

And be brave. Everything else is boring and won’t work.

Deeper in, you understand the reasons he might be targeted for annihilation. First, he is an intellectual who shows a warm, scholarly respect for the stories and insights into human behavior—into the meaning of things—in the Old and New Testaments. (He’d like more attention paid to the Old.) Their stories exist for a reason, he says, and have lasted for a reason: They are powerful indicators of reality, and their great figures point to pathways. He respects the great thinkers of the West and the Christian tradition.

More undermining of the modernist project, Mr. Peterson states clearly more than once that grasping at political ideology is not the answer when your life goes wrong. There’s no refuge there, it’s a way of avoiding the real problem: “Don’t blame capitalism, the radical left, or the iniquity of your enemies. Don’t reorganize the state until you have ordered your own experience. Have some humility. If you cannot bring peace to your household, how dare you try to rule a city?”

That is a dangerous thing to say in an ideological age.

What should we do instead? Admit life ain’t for sissies. You will die and on the way to death you will suffer; throughout you will be harassed by evil, both in the world and in your heart: “Earthquakes, floods, poverty, cancer—we’re tough enough to take on all of that. But human evil adds a whole new dimension of misery to the world.”

The only appropriate stance: “Stand up straight with your shoulders back” and “accept the terrible responsibility of life with eyes wide open.” Literally: “Quit drooping and hunching around. Speak your mind.” Competitors and predators will start to assume you’re competent and able. Moreover, it will “encourage the serotonin to flow plentifully through the neural pathways desperate for its calming influence.”

“Aim up. Pay attention. Fix what you can fix.” Respect yourself, take part, keep “the machinery of the world running.”

Don’t be arrogant. “Become aware of your own insufficiency. . . . Consider the murderousness of your own spirit before you dare accuse others, and before you attempt to repair the fabric of the world. And above all, don’t lie. Don’t lie about anything, ever. Lying leads to Hell. It was the great and the small lies of the Nazi and Communist states that produced the death of millions of people.”

He’s suggesting here the personal is political, but not in the way that phrase is usually meant.

If I were of the radical established left, bent on squelching contending thought, I’d hate him too.

Success is a mystery, but failure is not: “To fail, you merely have to cultivate a few bad habits.” Drugs, drinking, not showing up, hanging around with friends who are looking to lose, who have no hopes for themselves or you. “Once someone has spent enough time cultivating bad habits and biding their time, they are much diminished. Much of what they could have been has dissipated,” he writes. “Surround yourself with people who support your upward aim.”

The past is fixed but the future is not. You can learn good by experiencing evil. “A bullied boy can mimic his tormentors. But he can also learn from his own abuse that it is wrong to push people around.” Your future is not preordained by experience; don’t be cowed by the stats. “It is true that many adults who abuse children were themselves abused. It is also true the majority of people who were abused as children do not abuse their own children.”

“Pursue what is meaningful, not what is expedient.”

It is a good book, blunt and inspiring.

We live in a time when so many young (and not so young) people feel lost, unsure of how they should approach their lives, or life in general. Mr. Peterson talks about the attitudes that will help find the path. It is not a politically correct or officially approved path, but it is an intensely practical and yet heightened one: This life you’re living has meaning.

Back to the hostile interview, and the labeling of Mr. Peterson as “controversial,” which is a way of putting a warning label on his work. When people, especially those in a position of authority, like broadcasters, try so hard to shut a writer up, that writer must have something to say.

When cultural arbiters try to silence a thinker, you have to assume he is saying something valuable.

So I bought and read the book. A small thing, but it improved my morale.

January 30, 2018
Podcast: famous stutterers from Moses to Marilyn
Next Post

February 16, 2018 What Is Anglicanism? conference
Browse Our Archives
Related posts from The Northampton Seminar