It is a disturbing part of American history: the internment of American citizens of Japanese descent and Japanese who were legally living in the U.S. during World War II. About 120,000 people were placed in internment camps in the western United States.

Life in the camps was harsh. The only furnishings were beds. There was no privacy. Many people lived in metal huts, which provided no protection from heat or cold. However, many of those interned were resourceful, and determined to make the very best of their situation.

Prisoners were denied any belongings coming in, and the barracks were furnished only with beds. There were no luxuries like tools, tables, chairs, or curtains for privacy. Later, they could order modest items by mail. But their ethic was of tremendous resourcefulness. Nothing was wasted. Onion sacks were unraveled and woven into baskets and cigarette cases. Tiny shells on the ground were collected for brooches for special occasions like weddings and funerals. Toothbrush handles were cut off and repurposed. An ugly stub of iron sewer pipe was incised with a bird and blooming plum branches to fashion a vase. A ring was made from a peach pit.

Last spring, a New Jersey-based auction house auctioned off a collection of art from the internment camps. The collection is from the estate of author Allen Hendershott Eaton, who wrote Beauty Behind Barbed Wire: The Arts of the Japanese in Our War Relocation Camps.

Eaton visited 5 camps in 1945, curating the artistic creations of those in the camps. As one reviewer put it, in Eaton’s book:

The evacuees become real, their creations become symbolic of their spirit, which refused to wither in strange and stifling circumstances….It is the author’s own sense of humanity and compassion that makes ‘Beauty Behind Barbed Wire’ an intensely moving and dramatic book.

45 years after the internment, President George H. W. Bush offered a formal apology to the internees on behalf of the United States, acknowledging the grave injustice that was done.

There is no possible way to undo the harm of the internment. However, the art of the people in the camps is another reminder of the innate creativity of the human being and the strong urge to flourish despite harsh circumstance. May this art stand as a reminder not only of a horrid part of our history, but of the gifts endowed within us by our Creator. 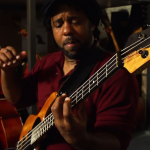 July 23, 2015
All About That Bass: 3 Things I Learned about the Economy of Wisdom from Victor Wooten
Next Post 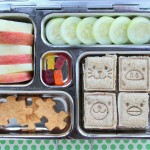