Just a couple of weeks ago, many people were tossed unexpectedly into a spiral of shock and loss. People all over the world found themselves grieving at the same moment as news broke that Prince Rogers Nelson was dead on April 21, 2016. This moment of loss was filled with unified diversity. People of different ethnicities, nations, genders, ages, and religions felt similar feelings of bereavement. For some, who may never even have attended a Prince concert, they felt the loss of a friend whose words expressed their deepest feelings and curiosities. Others felt the loss of a guiding spirit whose transformative journey through music inspired them to transform and journey in their life as well. Still, for others, one of their bucket list items—namely, seeing Prince live in concert—was erased and rendered impossible. Yes, many felt Prince’s passing.

Although mourned by many, something beautiful happened at Prince’s transition. All these different bodies, experiences, and locations came together to mourn and affirm Prince’s impact on their lives (i.e., Spike Lee Honors Prince, Tribute Events in Seattle, Tribute Events in LA, and so on). All over the world for the past few weeks, people have gathered for impromptu and scheduled concerts to remember their musical companion with his eclectic messages of love and loss, social change and work, spirituality and independence. Camaraderie among strangers was born because people found kinship and humanity in sharing their common experiences of Prince’s music, work, and journey.

In many ways, the Pentecost story of Acts 2 is reminiscent of a similar moment. Bodies from a diversity of backgrounds share a common moment and sentiment that strikes a cord of comradeship and kinship not attested to before.

Acts 2 describes the arrival of the Holy Spirit among Jesus’ band of disciples (Acts 2:1-4). In their own right, these left behind followers of Jesus (Acts 1:9-11) were comprised of both women and men and represented various branches of Judaism and different occupations and socioeconomic statuses (Acts 1:13-14; Luke 6:14-16). Indeed, within their own ranks, the group of Jesus followers waiting for God’s manifestation of power was diverse. Yet, such diversity did not impede the arrival of the Holy Spirit nor its outcome.

The writer of Acts characterizes Pentecost as more than simply the arrival of the Spirit. Pentecost also marked the day a diverse body of believers began proclaiming the Good News that “God has made Jesus, the one who was crucified, both Lord and Christ” (Acts 2:36). Such powerful proclamation was public and disruptive. It moved people to pay attention (Acts 2:5-8) and weakened the control and influence of an elite powerful few over the masses (Acts 2:42, 42-47; 4:1-4). Most importantly, it transformed the proclaimers from a motley band of spineless disciples (Luke 22:61-62; 24:5-12; 36-42) to a diverse and powerful people who grab the attention of everyone in their proximity.

Indeed, the Interfaith Tour project embodies the spirit of Acts 2. Launched by Coexister, the French interfaith youth movement, the Interfaith Tour sent five students of different faiths to Jewish, Christian, Muslim, atheist, and agnostic communities to meet people and listen to the stories and experiences of strangers. The project is grounded in the moment of encounter between students and their hosts. It tries to strike a positive relationship among different groups that are not accustomed to be in peaceful and respectful dialogue and relationship with one another. The project description states it best when it says, “Their journey reveals what happens when you stop talking about the other and start talking to the other.”

Like the Interfaith Tour project, the Pentecost story in Acts 2 depicts a moment in which genuine and peaceful exchange takes place across diversity lines. Pentecost is marked by a collective encounter with God that transforms the life of the community together with spectators sitting on the sidelines. People unaccustomed to being together and understanding one another assemble. The church is born as a unified, yet diverse, community in the moment. We encounter the same Good News the bystanders of Jerusalem heard, standing outside the assembly of believers. Within the sound of many voices and languages, they heard one message—namely, the believers’ testimonies to “the mighty acts of God” (Acts 2:11).

Second, there are the sounds of many tongues or languages being spoken inside the community among the early believers (Acts 2:4, 6). It is reminiscent of the tower of Babel in which different languages and dispersion were the consequence of unified human pride (Gen. 11:1, 4, 6-9). Yet, the eruption of many languages in Acts 2 seems to reverse the consequences of Babel. Now many languages are the result of unified human humility, faithful prayer, peaceful presence, and future expectation (Acts 2:16-21).

Third, there is sound that is situated outside the confines of the Jesus group. This is the sound of many other people being drawn together by the many languages inside (Acts 2:5-6). In this moment, readers encounter the capacity of God’s power and God’s sound to draw curiosity and shake the comfort level of onlookers. People outside the community of believers share the same question: “Who is speaking our many languages?” In fact, vv. 8-11, which is what many scholars call “The Catalogue of Nations,” lists the many kinds of people present (some ancient and others contemporary). Framing the catalogue, at both the beginning and end, are repeated references to sound (Acts 2:6, 11). A single moment produced many sounds, languages, and tongues.

Hear the Good News! God has done mighty things in many sounds! What sound will you and your congregation make? What sound will you and your organization make? Pentecost demands we ring with a sound that ignites change and makes a difference. Living into Acts 2 means fearlessly catching the attention of the complacent and the disturbed, the indifferent and the passionate, the corrupt and the righteous. If nothing else, Pentecost should remind you that SOUND should be—must be—made by followers of the Lord, Jesus Christ. Moreover, that sound, should change something in our neighborhoods, schools, communities, institutions, and like the Interfaith Tour and Prince has done—change the world. 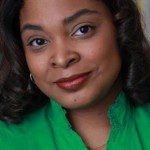 Dr. Smith completed her Ph.D. in New Testament Studies at Emory University as the first African American woman to receive a doctorate in the New Testament Program. Her dissertation is called, “Live as Strangers in Your Own Land: The Letter of 1 Peter and Diaspora Discourse,” which is due for publication Fall 2016. Her work has been supported by organizations such as the Louisville Institute, the Ford Foundation, The Fund for Theological Education, the Mellon Mays Fellowship Program, Black Women in Church and Society Program, and the Social Science Research Council. Her research interests include: Studies on Peter and Peter’s Letters, Luke-Acts, Call Narratives, and biblical discourses on diaspora.

She has contributed to multiple writing projects and series, including the Feasting on the Gospels series, the Reading & Writing Theologically series, the Human Rights Campaign Online Lectionary, the Church Health Reader Magazine, and others. Smith is currently working on academic projects related to her dissertation and research interests. Smith also does a lot of independent writing and blogging about graduate work, applying for scholarships and fellowships, studying the bible as well as offering independent bible study podcasts through her website:www.shivelysmith.com. She is a sought after preacher, teacher, and motivational speaker. Smith is Assistant Professor of New Testament at Wesley Theological Seminary in Washington, D.C.

May 16, 2016 Walter Brueggemann on Wisdom (Proverbs 8:1-4, 22-31)
Recent Comments
0 | Leave a Comment
"Thank you for this post. You touch on one of my dilemmas - honoring our ..."
John Gills Support Those Who Have Served (Luke ..."
"I did not see Mihee place any restrictions on thanking veterans everyday. She just talked ..."
WayneMan Support Those Who Have Served (Luke ..."
"Your article is so deceiving. Posted for Memorial Day weekend and your first sentence says ..."
Mary Support Those Who Have Served (Luke ..."
"You idiot Boko isn't a person. Typical thoughtless rambo crap. Sit down, nobody needs your ..."
GayPirate Chibok Girls: We Will Not Be ..."
Browse Our Archives
get the latest from
Progressive Christian
Sign up for our newsletter
POPULAR AT PATHEOS Progressive Christian
1