This text is one of the loveliest and most important biblical texts that respond to the question: “What is the world like? How does it work?” The text is framed as a speech by “wisdom” who is presented as an active agent who has a voice for self-announcement. It is the work of the poet to bring to availability that which remains hidden but is deeply operative in the working of creation.

Wisdom identifies three relationships that are crucial to the working the world. First, wisdom has a peculiar relationship with the creator. “I was beside him” from the beginning.

In Christian tradition this claim of wisdom has morphed into inchoate Trinitarian theology so that wisdom from this text appears as the “word” (logos) in John 1:1-18 or in other texts as God’s generative Spirit. The text itself does not articulate anything about “the Christ” or “the word” who creates, but the interpretive trajectory set in motion here makes that claim.

Second, wisdom describes its (her?) relationship to all the creatures who come after and in the wake of wisdom. Not only are all the other creatures after, but they are created in and through the work of wisdom. Thus before wisdom no deep seas, no springs of water, no hills, no fields, no “bits of soil.” The creator creates with wisdom:

He established the heavens;

He made firm the skies above;

He established the foundations of the deep;

He assigned to the sea its limits.

God did all of this, but wisdom was there with God and so is implicated in the act of creation and in the continuing sustenance of creation.

But third, wisdom has a practical connection to human beings who live in God’s created, well-ordered world.  Thus this entire speech of wisdom is a summons to humanity. (The wisdom tradition is famous for lacking all “sectarian” interest, so that no specific group or community or nation is addressed. The truth of wisdom pertains to all human beings without exception.) Wisdom summons human beings—all of them!—to “learn prudence, acquire intelligence”—that is, pay attention! And in the coda of verses 32-36 wisdom assures that those who heed wisdom are happy and have life. Conversely those who miss wisdom injure themselves and love death.

The more specific, immediate, and practical instruction in the book of Proverbs gives substance to what it means to “be wise.” Thus there is the teaching of wisdom concerning respect for the poor, the importance of generative work, the danger of careless speech, the risk of unpayable debt, the hazard of having the wrong kind of friends. These very specific forms of conduct will diminish the wellbeing of the community, whereas good work, good speech, good friends, and respect for the poor—all the counsel of wisdom—will bring wellbeing to the community. Wisdom guarantees it!

We can see that wisdom is the embodiment and agency of generative moral coherence in creation. Moral coherence insists that “deeds and consequences” come together. The world is not randomly “disconnected” so that we can do stupid destructive things with long-term impunity. The creator God, via wisdom, assures the connection between the choices we make and the outcomes with which we must live, that is, it is all about “sowing and reaping.” The moral coherence that wisdom assures is generative. That is, it is guaranteed that good choices will eventuate in shalom for the choosing self and choosing community. The connection is generative so that wisdom has agency and will do what it says by way of guarantee. It is for that reason that good choices sometimes surprise with good outcomes that one could not have reasonably anticipated. Wisdom is not a moral code, but a force that is creative and willing creation to its true fulfillment. “Being wise” is bringing one’s life, conduct, and policy into coherence with that generative resolve for shalom.

The alternative is “foolishness.” Foolishness is living against the grain of that moral coherence that wisdom guarantees. Foolishness is the assumption that we can do what we want and have what we want according to our money, power, and influence, without any check or restraint (Citizens United!). Foolishness in the modern world is imagining that we are autonomous, and that without God “everything is possible.” Thus Gerhard von Rad can call foolishness “practical atheism,” living as though God were not and as though wisdom did not summon.

One can see the connection between theological autonomy without acknowledging God and destructive behavior. Thus in Psalm 14

Fools say in their heart, “There is no God…

The present political campaign in which we are enmeshed is in many ways an exhibit of foolishness that mocks wisdom. Thus we get a great deal of careless speech. We get assaults on the poor. We get indifference to hopeless debt that is evoked by history and guaranteed by policy. We get illusions of technological fixes to relational problems, as though some technical solution can effectively assuage global warning that is grounded in unbridled greed.

So much of the political campaign is conducted without attentiveness to any moral coherence, even though there is a great deal of cheap religious talk. Indeed it is a though there is a correlation between cheap religious talk and practical foolishness that does not understand that serious faith concerns the connectedness of all human beings and all creatures, so that society cannot be safely divided between the indifferent rich and the needy poor.

There is a strong strand of interpretation from this passage in a feminist direction, because the Hebrew word for wisdom (hokmah) is feminine. I suspect there are limits to how much can legitimately be made substantively of the gender of the noun. But insofar as wisdom is about connectedness of all creatures in a moral coherence, then the feminist accent is especially useful and suggestive. This is evident in the capacity of women in Congress to cooperate across ideological lines in a way that male members of Congress tend not to do. Indeed it is as of male macho posturing has no place for such connectedness. Thus there is in practice and in policy a rich vein of foolishness that in turn gives way greed and eventually to violence.

Clearly no party or candidate has a monopoly on wisdom, and no party or candidate is immune to foolishness, because foolishness shows up everywhere. It is worth remembering in the midst of the campaign that a) wisdom, not foolishness, delights the creator, b) wisdom generates moral coherence that cannot be mocked with impunity and, c) in quite practical ways policy and conduct can be more fully brought into line with the claims of wisdom. Foolishness is alive and well among us, promising short-term greedy solutions to big neighborly issues. But foolishness need not prevail. Wisdom came first. Foolishness came after and misleads. It is no wonder that wisdom calls to us with urgency. When we heed, we do not injure ourselves and do not love death.

Walter Brueggemann. Sabbath as Resistance: Saying No to the Culture of Now 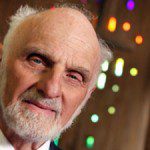 Dr. Walter Brueggemann is Professor Emeritus of Old Testament at Columbia Theological Seminary. He is an ordained minister in the United Church of Christ, and a past president of the Society of Biblical Literature. He has recently authored Disruptive Grace (Fortress Press).

May 23, 2016 Support Those Who Have Served (Luke 7:1-10)
Recent Comments
0 | Leave a Comment
Browse Our Archives
Related posts from On Scripture - The Bible