On Being a Hillbilly

On Being a Hillbilly August 21, 2005 Fr. Joseph Huneycutt 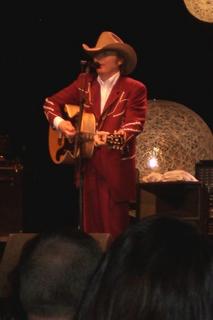 Back in 1986 I was working at a little radio station, WIFM, in Elkin, North Carolina. It had been a while since I’d “spun” Country and when I came to a 45 by Dwight Yoakam, I wasn’t sure how to pronounce the name. I was alone, there wasn’t time to ask, so I announced the artist as Dwight Yo-AHH-kum. Dwight was new, I was new; the program director was gentle.

As Dwight said on Friday night at Western Carolina University in Cullowhee, that was over 18 years ago. He didn’t mention me of course, but I was at the show. In fact, he’s part of our family. It’s a mixed family which includes, among others, one Prince and two Georges (Strait & Clinton). My wife and I will celebrate our 18th wedding anniversary in November. Dwight’s been there the whole time.

Looking around at those gathered for the event, I was struck by how much we all looked alike. Young men with pony tails and cowboy hats, older men with caps, women all dressed up; couples. To say it was a mostly Caucasian audience would be an understatement. A goodly number of folks in their 60’s & 70’s — mixed in with a bunch of college kids. I felt a little ancient when I realized that some of the fans weren’t even born when Dwight released “Honky Tonk Man” and “Guitars & Cadilacs” back in ’86. They’ve always known how to pronounce “Yo-Kum”. But everyone knew the words to most of the songs, old and young alike. Country. It’s a culture.

I’m no Charlie Daniels fan, though I did see him at the Big Ways Birthday Ball back in 1973, yet as the opening act he and his band did a good job. He even gave a Christian “testimonial” and sang a gospel hymn which, dang!, was great.

During the break between the two acts, Dwight’s pre-show music was all Conway Twitty. That would never have been my choice. But to see the older crowd, hardened working men and women, mouthing the words to each song as people milled about was priceless. That’s where I come from.

Dwight kept us waiting, not taking the stage till 9:35 pm. At one point the twenty-something gal sitting next to my wife had shouted: “Come on Dwight, honey, it’s almost my bedtime!” She was a hoot. After seemingly ALL of Conway Twitty’s hits had been played she said, “Well I’ve heard all those songs before, but not all at one time. Come on, Dwight!”

Except for Miss Twenty-Something, who wanted him in jeans, Dwight didn’t disappoint. He’s no grand showman, mind you, but I’m a sucker for singer-song writers and artists who do what they do and not what they’re told they should do for mass consumption. In that respect, Dwight’s way cool — never even took a sip of water and played for nearly two hours before encore. I got the impression that if it weren’t already late, he’d have played for two more.

The highlight of his performance was a bluegrass tribute to Jimmy Martin, who passed away May 14th. Bluegrass, in these parts, is like a religion. And when one of the biggies passes, it’s a big deal.

On the way home on Saturday, the wife and I took the Blue Ridge Parkway. (That’s where she snapped the pic below.) You live in these parts long enough and you can begin to take the scenery for granted. The Parkway has a way of shaking you out of it. I don’t often claim it, but following Dwight & Drive, I’ll humbly accept the above title. 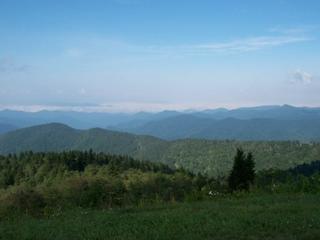 It’s where I come from.

August 23, 2005 Spacing Out
Recent Comments
0 | Leave a Comment
Browse Our Archives
get the latest from
Eastern Orthodox
Sign up for our newsletter
Related posts from Orthodixie

6 Spiritual Lessons Our Cats Can Teach Us
Are you a dog person or a cat person? Most people fall...
view all Eastern Orthodox blogs
What Are Your Thoughts?leave a comment
Copyright 2008-2021, Patheos. All rights reserved.