Cyprus: Portrait of a Christianity Obliterated 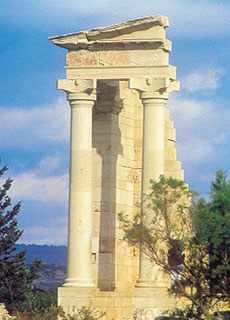 ROMA, March 9 2006 – The island of Cyprus was the first destination of the “special mission” that the Holy Spirit entrusted to Paul and Barnabas, according to what is written in the Acts of the Apostles, in chapter 13.

On the island they found a Roman governor, Sergius Paulus, “an intelligent man who wanted to hear the word of God and believed, deeply shaken by the teaching of the Lord.”

But if Paul and Barnabas were to return to Cyprus today, to the northern part of the island, they would find not the Romans as governors, but the Turks.

And instead of a Christianity being born, they would find a dying Christianity, with the churches and monasteries in ruin, or else transformed into stables, hotels, and mosques …

The Islamization of the north of the island has been concretized in the destruction of all that was Christian. Yannis Eliades, director of the Byzantine Museum of Nicosia, calculates that 25,000 icons have disappeared from the churches in the zone occupied by the Turks …

The scourge has left its marks. It has struck Cyprus, the site of the most ancient Christian community on European soil, in its artistic, cultural, and religious treasury: stupendous Byzantine and Romanesque churches, imposing monasteries, mosaics and frescoes of inestimable value. It is a heritage that in the northern part of the island, under Turkish occupation, has been sacked, violated, and destroyed.

The Turkish flag billows on the façade of the church of Agia Paraskevi, in the once Greek Orthodox village of Angastina. A sign says that work is underway to transform it into a mosque. The bell tower, which no longer bears a cross, is a strange minaret with the loudspeaker of the muezzin fixed upon an archway.

Christodoulos, the young archeologist accompanying me, is visibly shaken: “I was baptized here,” he says in a voice hoarse with emotion. He is one of the 200,000 Greek Cypriot refugees who, thirty years ago, lived in the north of the island and were chased out of their homes.

Christodoulos kneels on the spot where he was once baptized and lights a candle. The Turkish construction workers, squatting in front of the apse for their lunch break, look at him curiously: “Every time I come back to this area, it’s always worse,” he sighs.

Almost the entire artistic patrimony of the Orthodox Church in the territory occupied by the Turks – 520 buildings between churches, chapels, and monasteries – has been sacked, demolished, or disfigured. Only three churches and one monastery, the monastery of Saint Barnabas, which has been turned into a museum, are in a more or less dignified state.

“The ruin is before our eyes, but the European Union prefers to look the other way,” the Cypriot foreign minister, George Iacovou, bitterly tells us. “The only hope is that, in the course of negotiations for Turkey’s adhesion to the EU, someone might pull out the dossier of shame.”

I point out to him that most of the mosques in Greek Cypriot territory have been restored, while his government has authorized the transformation of churches into restaurants and hotels, an insult to the sentiment of believers …

I insist: what do you have to say about the churches that, still today, are being turned into mosques? The Turkish Cypriot functionary spreads his arms wide: “It is an Ottoman custom…”

It as a tradition that, unfortunately, continues. An unsettling calling card for a Turkey that aspires to enter the European club.

Thanks to FWD from Fr Miguel Grave de Peralta.