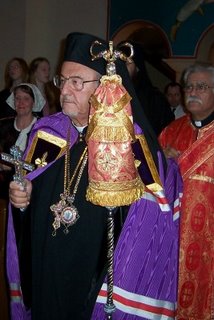 TO BE READ FROM THE PULPIT AND PUBLISHED IN THE PARISH BULLETIN
July 25, 2006

Brother Hierarchs, Reverend Clergy, Esteemed Members of the Archdiocese Board of Trustees, Parish Councils and God-fearing Faithful of our Archdiocese:

Greetings in the name of our Lord, God and Savior Jesus Christ. It is with great sadness and a heavy heart that I write to you while the bombs are falling on Lebanon. As you have been hearing in the media (i.e. television, newspapers and the internet), Lebanon is being systematically destroyed, both the infrastructure and, more importantly, the people. Everyone agrees that the result is a humanitarian disaster for the people of Lebanon.

As of today, there are close to 400 Lebanese men, women and children who have been killed. The number of displaced Lebanese is approaching one million! We see in the news men, women and children being killed, maimed and burned by phosphate bombs. At the same time, Red Cross ambulances carrying the sick and wounded are being targeted; airports, communications systems, bridges and roads have been destroyed and entire neighborhoods have been leveled. To put things in real and human terms, we were recently informed of one of our faithful from the Archdiocese of Zahle who was driving with his two children. An Israeli bomb hit their car, seriously injuring the father and one child and killing the other, a 15 year old boy. Just yesterday, a family of eight was killed in their home by an Israeli bomb. These are but two stories from among thousands.

My beloved faithful, Lebanon is part of our Patriarchate of Antioch and all the East. So many of the people of our Archdiocese have their spiritual and cultural roots in Lebanon and especially in Beirut and South Lebanon (such as Jdeidet Marj’ayoun) where the majority of the destruction is taking place. Yesterday, I spoke with Metropolitan ELIAS of Beirut and he told me of the deplorable and dire conditions in his archdiocese and the Archdiocese of Tyre and Sidon (South Lebanon). He asked for our fervent prayers and help for Lebanon. I assured him of our unceasing prayers and that we will do our part to help. Therefore, I appeal to you to give generously to help the suffering people of Lebanon.

Finally, as we prepare to begin the Dormition Fast on August 1, let us beseech the most-holy Theotokos to intercede for the suffering people of Lebanon.

Your Father in Christ,

Other letters and concerns may be read H E R E.

* * I am posting this FYI; no comments will be posted concerning this post. * *

July 28, 2006 Ancient Syriac Prayers
Recent Comments
0 | Leave a Comment
Browse Our Archives
get the latest from
Eastern Orthodox
Sign up for our newsletter
Related posts from Orthodixie

Reincarnation & Plays
Imagine that you're in a play - and all the people in...
view all Eastern Orthodox blogs
What Are Your Thoughts?leave a comment
Copyright 2008-2021, Patheos. All rights reserved.
error: Content is protected !!