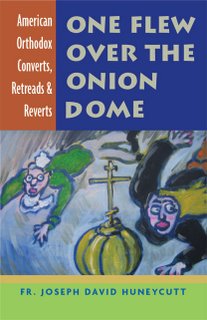 Face it, some people convert to Orthodoxy in order to get married. These may spend their whole lives working out their salvation piously in their new home.

Others may have converted to Orthodoxy because their ruler said to (e.g., Constantine, Vladimir, the Tsars, etc).

Then there’s the rest of us.

As a Convert, it’s always a joy to see the zeal and thrill of the newfound Faith in the expressions (written, spoken, action, facial) of new Converts. It’s also perfectly normal to see this fade or turn sour — even poisonous — later on. An American priest teaching a Catechism Class is usually well aware that many of those shiny faces may soon change — even leave — worse yet, they may even stay!

All this is to say, it’s never too late …

YIKES! I just discovered my PayPal button is not working. Until it’s back operational, individualized copies available by email —
orthodixie at aol dot com.

September 30, 2006 This is Pretty [Byzantine] Intriguing ...
Recent Comments
0 | Leave a Comment
Browse Our Archives
get the latest from
Eastern Orthodox
Sign up for our newsletter
Related posts from Orthodixie

What Jesus Said: The Teachings Time Forgot
If you read through the early Christian texts known as the Gnostic...
view all Eastern Orthodox blogs
What Are Your Thoughts?leave a comment
Copyright 2008-2021, Patheos. All rights reserved.