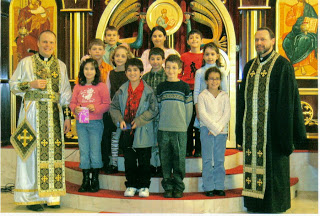 There once was a boy named Andrew.

Andrew was a very happy child and his parents loved him dearly.

Andrew could run, jump, and play outside – and in any room in the house …

Except the living room.

There was only one rule in Andrew’s home: Thou shalt not play in the living room.

Andrew was a contented child. But, more than anything in the world, he desired to play in the living room.

Every time he passed by the room, he longed to play there. More and more he became obsessed with the idea of playing in the forbidden space.

One day, while his parents were next door, Andrew seized the opportunity!

He entered the living room. He ran. He jumped. He flew from chair to sofa and back again. He was having so much fun! He couldn’t understand why his mother would never allow him to play in the living room. Why, this was the funnest room in the house!

It lay broken – shattered – on the floor.

Andrew stopped playing. Not quite knowing what to do, he quickly swept up the pieces of the broken vase and hid them under the skirting of a chair.

Soon, his parents returned. They sensed something was wrong with their little boy, but he said everything was fine.

He stopped playing in the hall, the driveway, and in the den.

He even curbed his play outside and with friends.

He stopped running and began to mope. His shoulders began to slump. He did not smile. Andrew was no longer a happy contented young boy.

When his parents would ask him about his sullenness, he would only reply: “Everything’s fine.”

His eyes would no longer look into the living room with a burning desire, but with a sad and terrible fear. There, under his father’s formal chair, lay hidden the fragments of his mother’s favorite vase.

Weeks went by. Months. Andrew’s personality sank deeper and deeper under the weight of his worry.

One day, as he was moping up the hall, he saw his mother emerge from the dreaded room.

Until he saw her squat down …

and open her arms wide.

Then it happened. The tears poured down his face and he ran and snuggled into his mother’s embrace.

He didn’t have to say a word. His mother had seen the fear and sorrow in his eyes. It was only then that she understood why her little boy had been so melancholy.

And it was then that Andrew first knew the wonders of forgiving love.

We do the same thing, do we not? Like St Paul says, “I do not understand my own action. For I do not do what I want, but I do the very thing I hate.”

Like Adam and Eve in the Garden, who had one rule, we break the commands of God and try to hide our sins under cover of darkness. We live in fear of being found out. It affects our mood, our relationships with those around us – and our relationship with God. Yet, like Andrew’s mother, God longs for us to be freed from the bondage of our broken and sinful lives.

He will embrace us with a mother’s love … if we but let Him.

This story is taken from a sermon, preached years ago, by the Rev’d Andrew Sloane (then Rector of Grace Church, Sheboygan, Wisconsin) — hence the title. The picture is of the 3rd Grade Church School of St George Church, Houston, following “first confession” (along with me and Fr John Salem).

March 10, 2007 CHRIST: He Was, But Is ...
Recent Comments
0 | Leave a Comment
Browse Our Archives
Related posts from Orthodixie

The Wisdom of Age?
by Thomas Schenk I was thinking, the other day, about a couple...
view all Eastern Orthodox blogs
What Are Your Thoughts?leave a comment