The Sunday of the Triumph of Orthodoxy

The Sunday of the Triumph of Orthodoxy March 16, 2008 Fr. Joseph Huneycutt

What is the Sunday of Orthodoxy?

A yearly thanksgiving is due to God on account of that day when we recovered the Church of God, with the demonstration of the dogmas of true religion and the overthrowing of the blasphemies of wickedness …
Source
Image Source

Once every year, on the Sunday of Orthodoxy, the Orthodox people in America emerge from their ethnic islands to celebrate the triumph of the Orthodox Faith over the iconoclastic heresy. This victory happened in the year AD 787, 1197 years ago. I am proud of our history; for those who have no past, have no present and will have no future. There is a difference, however, between contemplating history and worshiping history …

We are no longer a church of immigrants; the first Orthodox liturgy was celebrated in this country before the American Revolution. Many of our Orthodox young people have died on the battlefields of various wars, defending American ideals and principles. We have contributed much to the success of this country in the fields of medicine, science, technology, government, education, art, entertainment, and business.

We consider ourselves Americans, and we are proud of it—except when we go to church, we suddenly become Greeks, Russians, Arabs, and Albanians. Despite our rootedness in the American soil, our Church in America is still divided into fifteen jurisdictions, contrary to our Orthodox ecclesiology and canon law, which forbid the multiplicity of jurisdictions in the same territory …

Holding to the Orthodox faith, as to something holy, loving it with all their hearts and prizing it above all, Orthodox people ought, moreover, to endeavor to spread it amongst people of other creeds. Christ the Savior has said that “neither do men light a candle and put it under a bushel, but on a candle stick, and it giveth light unto all that are in the house.” (Matthew 5, 15) The light of Orthodoxy was not lit to shine only on a small number of men. The Orthodox Church is universal; it remembers the words of its Founder: “Go ye into the world, and preach the gospel to every creature” (Luke, 16, 15), “go ye therefore and teach all nations.” (Matthew 28, 19) We ought to share our spiritual wealth, our truth, light and joy with others, who are deprived of these blessings, but often are seeking them and thirsting for them …

Here is the entire text of St Tikhon’s Sunday of Orthodoxy sermon.
Thanks to FWD from Jean-Michel. 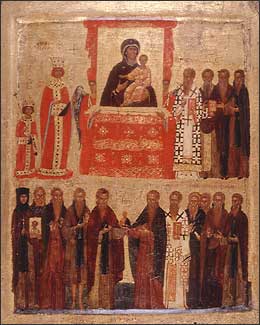 As the Prophets saw, as the Apostles taught, as the Church has received, as the Teachers express in dogma, as the inhabited world understands together with them, as grace illumines, as the truth makes clear, as error has been banished, as wisdom makes bold to declare, as Christ has assured, so we think, so we speak, so we preach, honouring Christ our true God, and his Saints, in words, in writings, in thoughts, in sacrifices, in churches, in icons, worshipping and revering the One as God and Lord, and honouring them because of their common Lord as those who are close to him and serve him, and making to them relative veneration.

Read the Synodikon commemorating the Triumph of Orthodoxy.

7 Ways to Get Your Monkey Mind Back...
How did you sleep last night? Perhaps you’re like me—one of those...
view all Eastern Orthodox blogs
What Are Your Thoughts?leave a comment
Copyright 2008-2020, Patheos. All rights reserved.