Orthodox Priestesses: She Said, She Said 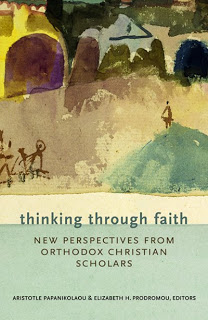 Here’s a few excerpts from the review, What Beef Have Women Theologians with Divine Order? —

An old saying came to mind while reading Karras’s article, and I paraphrase: “She who defines the terms wins the argument.” From the first time she used it, I knew that Karras’s term “women’s liturgical participation” was going to be key to her argument. When you are no longer talking about order, as in holy orders and ordination, but about liturgical participation, the rules of engagement have changed. In fact, while making counter-argument notes in the book’s side margin, over and over again, I wrote order and revelation. (Granted, there are a few places where I wrote OK as well as OMG!)

Karras tempts one to leaping jumps of justification with insufficiently referenced words such as these:

“In the United States, at least three priests, one in the Greek Orthodox Archdiocese and two others in the Orthodox Church in America, were prohibited in the past several years by their diocesan bishop and their Synod of Bishops, respectively, from continuing to include girls among their parish’s acolytes. The hierarchs’ rationales ranged from fear of negative reactions from traditionalist elements within the church, in the former instance, to an argument, in the latter, that female acolytes were contrary to tradition because only men have served within the altar (which is historically untrue)” (p.115).

With regard to the above quote, Karras offers the following footnote:

“With respect to the contention that ‘only males are to be admitted to service within the holy altar,’ this is patently untrue, whether one considers the ordination of female deacons at the altar in the Byzantine Church, the regular acolyte activities of nuns in monastic churches, or the informal functions of older women maintaining the sanctuary in Greek parish churches or assisting in the vesting of the clergy in the altar areas of the great cathedrals of Russia” (pp.115-116).

As far as I know, at least as I was taught, no one should go into the holy place (the altar) without a blessing. There are, as Karras noted, instances where females are blessed to go behind the iconostasis. It is interesting to note, however, that she places no proscriptions on those who do so (e.g., post-menopause), but that would, no doubt, lead her back toward the so-called traditionalist elements. Why on earth do Russian clergy need women’s help vesting in cathedrals? That one seems completely out of left field. As the befuddled, such as my sixteen year old son, are known to say, “I got nuthin.” In this case, I’ll believe it when I see it.

Really, though, since when is “traditionalist elements within the church” a questionable position? In my experience, a stance against such would seem a slope worthy of avoidance. (In other words, sans the traction of tradition, you may slide.) May God bless the hierarchs who prohibited these innovative priests from such “untraditional elements.”

Many more quotes of note — in support of women’s ordination to the Orthodox priesthood — and a laywoman’s response, in its entirety: HERE.

FWIW, here’s the first two paragraphs of the review (which might ring true to other former Anglicans):

When my husband and I, after a long struggle within the Anglican Communion, were in the process of becoming Orthodox, we were struck and comforted by our priest’s fundamental catechetical premise: “In the Church, we believe that which has been revealed to us.” With equal assurance, he taught that the Faith undoubtedly goes through changes and development in many areas but divine revelation is the same yesterday, today, and forever. You are free to disagree – even to disbelieve – yet, he maintained (as I believe does the Church) that some matters are settled and not up for negotiation. Thus it is that I do not believe women were, are, or ever shall be, called by the Church to the ordained priesthood. I believe this order to be God-ordained and neither a punishment for my sex, nor a glorification of my husband’s.

My purpose in this review is not to sway another’s opinion on women’s ordination; most are content and firm in their present position. I also do not cover the topic of the female deaconate [sic], being content, myself, that some things are allowed by the Holy Spirit to die out. I do hope, however, that Dr Valerie Karras’s argument for women priests sways no one toward acceptance of the novelty; up against the weight of Revelation and Tradition, her premise, though intriguing, is lacking.

Anyone read this book?