Can Anything Good Come Out of Palm Desert?

Can Anything Good Come Out of Palm Desert? July 20, 2009 Fr. Joseph Huneycutt 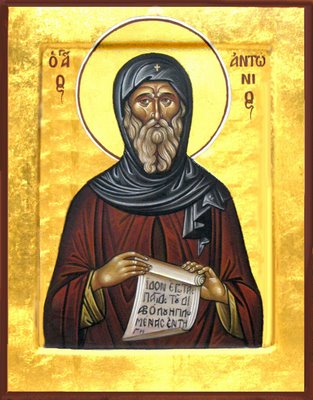 This reflection was originally delivered as a homily on Wednesday, January 16, 1991 on the advent of “Desert Storm”. (Which was, incidentally, the eve of the feast of St Anthony the Great, aka St Anthony of the Desert.) It has been slightly edited for the current situation. God willing, see you all in Palm Desert this week.

When I was a boy my brother and I shared a bed. I was around ten years old, my brother was three. One night I awoke to an eerie moaning sound. I turned, to my surprise, to see a white shadowy image weaving to and fro beside me in our bed. I sleepily tried to make out what it was, but the image and the moaning aroused such a great fear within me that I was petrified. I prayed to God for courage.

Eventually, filled with fear, I struck out at this ghost!

My fist ran into it with great velocity … and my arm came crashing down upon it.

For a split second, I was relieved. I had overcome my adversary!

Suddenly, I was startled by a shrill cry.

It was my brother.

My mom came rushing in to see what was the matter; when she turned on the light, all became clear. My “ghost” was a pillow — my brother had been waving it in the air as he moaned in his sleep.

This was a complex situation; I was relieved that I was no longer feeling threatened — yet I was in trouble with my mom, and I’d hurt my brother. Mixed emotions.

Recent events within the Antiochian Archdiocese have led many to mixed emotions. Fear, anger, sadness. Though there have been many prayers, people have been hurt. Some, like a frightened ten year old boy warring against a specter, with good intentions … have hurt their brother. It’s complex.

Long ago, in the Middle East, a boy lay sleeping. He was startled — not by bombs, sirens, scandal, or a moaning ghost … but by a voice: Samuel! Samuel!

The boy jumped up and ran to his teacher, thinking it had been his voice. Then it happened again. And, again a third time.

Finally, his teacher Eli, realizing that the voice may be God’s, said: “Go lie down, and if He calls you, say ‘Speak, Lord, for your servant hears.'”

Speak, Lord, for your servant hears.

Lately, some have felt passive, helpless — addicted to Internet news, gossip, and slivers of information. Chained, essentially, to worries and cares concerning the current church conflict.

If God were speaking right now, through all the clutter, would we hear? How to respond?

Oh, sure, I’ve prayed about recent events. I’ve even prayed for perceived enemies. But I’m quite sure I’ve not been expecting an answer. I’ve basically been verbalizing my worries and cares to a Higher Power. Yet, the very fact that these worries and cares have so dominated my being shows that I have been closed to God’s call. Sometimes, in a personal battle between faith and doubt, we surrender … to doubt.

If any of you have fallen into the same battle as I, rest assured! We’re in good company. For when the disciple Philip found Nathaniel and said: “We’ve found him! We’ve found the Messiah — the one we’ve been waiting for! Jesus of Nazareth!”

Nathaniel said, “Can anything good come out of Nazareth?

Though we may be reluctant to come to God — or to hear His call — God accepts us as we are, doubts and all.

The Prince of Peace is also the Light of the world. I was afraid while in the darkness. Yet, when the light entered my room, my fears dissipated. It was only my brother. I was so caught up in fear and trembling that, without the light, I panicked. The light made all the difference. (Without Light, it’s hard to recognize your brother.)

Nathaniel doubted anything good come come out of Nazareth, much less the Saviour of the world. He doubted no more when he came to the Light.

Just as I battled a “ghost” as a child, Samuel wrestled with the voice that called his name.

We can all learn from Eli and Samuel. The next time we are plagued by sleeplessness, worry, doubts and despair, instead of getting more and more anxious —

What would happen if we were to say, “Speak, Lord, for your servant hears”?

In accepting the call, we are told the God was with Samuel. Nathaniel followed Philip’s advice: “Come and see.”

And what of our current situation?

What are we called to do?

— Clear out the demons, the doubts, and the clutter … and listen for that still small voice.

“But,” we may say with Nathaniel, “can anything good possibly come of this?”

For although God accepts us as we are …

we have a higher calling.

These are complex times; many have mixed emotions.

But the Light says, “Come to me, all who labor and are heavy laden, and I will give you rest.”

Crossing the River Lee
I explained to somebody in a therapy session that it is important...
view all Eastern Orthodox blogs
What Are Your Thoughts?leave a comment
Copyright 2008-2020, Patheos. All rights reserved.