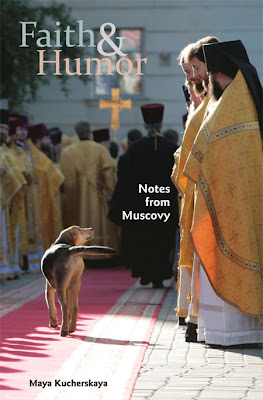 Olga Petrovna, a great admirer of Father Metrophanes, once approached him and said, smiling shyly, “Father, you are …”

An excerpt from Faith & Humor:

She stumbled momentarily, searching for words.

The priest shook his head from side to side and stared intently at Olga Petrovna.

“Wait a moment and I’ll explain why you think this,” he said and went behind the altar.

He didn’t come back for a long time. Olga Petrovna even became a bit nervous and wondered what the priest could be doing behind the altar. She wondered whether he was back there praying for divine inspiration and tried to guess what he might say to her. Would he explain to her, perhaps, in what way he was like Saint Seraphim?

Finally, the priest came back and said, “It’s because you’re an idiot.”

A book that dares to explore the humanity of priests and pilgrims, saints and sinners, Faith & Humor has been both a runaway bestseller in Russia and the focus of heated controversy – as often happens when a thoughtful writer takes on sacred cows. The stories, aphorisms, anecdotes, dialogues and adventures in this volume comprise an encyclopedia of modern Russian Orthodoxy, and thereby of Russian life.
Faith & Humor caused a sensation when it was published in Russia. As Kucherskaya writes in her introduction, “At one convent, the book was burned at the stake. Meanwhile, at a Seminary in another small town, it was added to the curriculum that helps future priests understand problems within the Church.”
Author Maya Kucherskaya artfully mixes fact and fiction, myth and history to offer a compelling, loving picture of a world of faith that is often impenetrable to outsiders. Yet Faith & Humor is not simply a book about the Orthodox Church, or about Russia rediscovering its faith after 70 years of state-sponsored atheism. Certainly there are elements of that here, and certainly Faith & Humor is an enlightening window into the “mysterious Russian soul.” But at its core, Kucherskaya’s book is a light, funny, insightful work of fiction about people who ardently believe something and who carry this belief out into the real world.

Joy Heals
The body heals with play, the mind heals with laughter, and the...
view all Eastern Orthodox blogs
What Are Your Thoughts?leave a comment
Copyright 2008-2021, Patheos. All rights reserved.